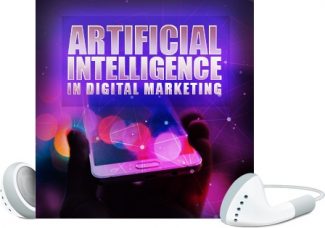 Being smart in business means knowing what’s just around the corner. It means thinking ahead and preparing for inevitable changes that will impact the way business is conducted. This is what allows a business to be resilient and to thrive in a changing environment. Digital marketing is no different. In fact, in his book The Personal MBA, author Josh Kaufman discusses the value of counterfactual simulation. This means imagining future possibilities and then preparing for them.

Let’s say that you have a big business that is doing well in a specific niche. Maybe you have a company that sells a whey protein shake. The mistake that some big businesses make is to assume that they’re too big to fail and to coast along as they are.

But what would happen if another company came along and released a better protein shake for a fraction of the price? What if a new source of protein were to be discovered? What if a study revealed that whey protein was bad for us? Any of these things could happen, and could completely shake up even the most established business.

The smart company though, will already have considered these eventualities and prepared for them. THIS is counterfactual simulation: it’s thinking about what’s just around the corner and then preparing for those possibilities.

AI and machine learning have the potential to completely change the face of internet marketing, rendering many older strategies obsolete even. Only by preparing for those changes, can you ensure that your websites manage to hold their position in the SERPs, that your advertising campaigns remain profitable, and that your services remain relevant.

And a lot of this stuff isn’t just speculation: it’s happening right now. AI is already making huge waves even though you might not realize it yet.

It’s affecting the way that SEO works, the tools and software we use, and the way that ads are displayed. AI is able to think faster and smarter than any human, and that’s especially true when it comes to internet marketing which is a data driven pursuit. An AI marketer can create endless amounts of content in a second – doing the work of hundreds of humans. All of that content will be perfect catered toward the target demographic. AI will run Google. It will manage entire business models. It will run AdWords. And it will run new tools we haven’t even dreamed up yet. The digital marketing singularity is just around the corner. This book will help you to prepare, and explain a number of concepts:

In this book, you will gain a crystal ball with which to gaze into the future of internet marketing, and to ensure that you are ready for all those changes when they come. By the end, you’ll be better prepared and in a better position than 99.9% of other marketers.

Before we go further, we should first take a look at precisely what AI and machine learning actually are. These are two related but also distinct terms, which often get confused. Both will impact on marketing, but in different and unique ways.

AI then is artificial intelligence. That means software and hardware designed to act and appear intelligent. Such software is capable of making meaningful choices, and conducting activities that we would normally consider the remit of humans.

AI comes in two broad flavors. One is weak AI, which is also known as narrow AI. Weak AI is essentially a form of AI that is designed to perform a specific job.

An example of this is the self-driving car. This form of AI is capable of knowing the positions of countless cars on the road, and being able to respond by steering, accelerating, breaking etc. If you were to watch a self-driving car from the outside, you might think a human were driving. In that way, it does a job that would normally be considered a human role.

Note: The Turing test is a test designed to measure the effectiveness of an AI. If you talk to an AI on a chat app, and you don’t know that it isn’t human, then it is considered to have “passed the Turing test.” Another example of weak AI is used when creating bad guys in computer games. These use programming in order to behave in a human-like manner, and to provide a challenge for the player.

However, the code is only useful in the context of the video game, and so it’s not about to turn into Skynet any time soon!

Weak AI might not sound as exciting, but it is being used for a huge range of extremely exciting things – from helping to treat disease, to improving the economy.

Conversely, the type of AI that we often see in science fiction, is what we know as “general AI.” This is AI that doesn’t have just one purpose, but that is designed to do everything that a human might be able to do. So you could play a word game with this AI, ask it how it’s feeling, or get it to look up something useful.

An example of a general AI is DeepMind, owned by Google. DeepMind is a company that has developed a “neural network,” that employs “general learning algorithms” to learn a huge range of different skills.

Many AIs such as IBM’s Watson are actually pre-programmed. That means that they work using a kind of flow chart, and will answer questions with the same answer every time. On the other hand, DeepMind is apparently able to think and respond via a “convolutional neural network.” Certain behaviors and reinforced and encouraged, and these will begin to become more prominent. This isn’t a perfect simulation of how a human brain works (cognitive behavioral psychology teaches us the importance of having internal dialogues and models for thinking), however it is the closest thing we currently have to a “true” general intelligence.

Machine learning essentially allows a piece of software to be “trained.” An obvious example of this would be computer vision.

Computer vision describes the ability that some machines have to understand visual information. An example is Google Lens, which can tell you what you’re pointing your phone’s camera at, whether that’s a type of flower, or a product you can buy in stores. Computer vision is necessary for self-driving cars to successfully navigate their environments, and it’s used by apps like Snapchat which use filters to change people’s faces.

How do these work? By looking at thousands and thousands of pictures of every type of object. While the machine learning algorithm will never understand what it is looking at, it can look for patterns in the data which will then be useful to identify those objects in future. For example, it might notice that faces are typically oval in shape, with a dark patch of hair on top. It then knows that if it sees an oval shape with a dark patch at the top, it’s possibly looking at a face. Machine learning has HUGE potential in just about every field. In futur e, it can be used to diagnose disease more accurately than a human doctor, to advise on financial decisions, to identify fraudulent bank transfers, and much more.

All of this has HUGE potential implications for internet marketing, and that’s what we’ll be exploring in the following chapters.

A while ago now, Google announced that it had become an AI-first company. While that might sound like meaningless marketing babble, the truth is that this determination actually has HUGE potential repercussions for marketers, businesses, and SEO.