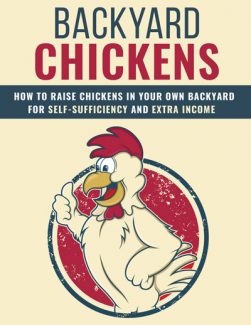 When it comes to birds domesticated and kept for their eggs, meat, or feathers, no poultry is more popular worldwide than the chicken.

In fact, there are about eight chickens for every human being on the planet, with more than 60 billion chickens raised annually.

Smaller than the vast majority of other commonplace livestock like cattle, pigs, or sheep, chickens are generally considered to be both the easiest working animals to upkeep and the most efficient producers per square foot.

As communities become increasingly reliant on local restaurants and grocery stores for their food security, more and more families are choosing to turn unused backyard space into their very own chicken farm.

Even outside of food production, chickens continue to grow in popularity both as pets and, thanks to their colorful plumage, as competitive show animals.

Combined with organic raised beds or larger scale foodscaping, choosing to invest in poultry farming remains one of the most productive uses for almost any backyard, big or small.

As egg producers, chickens have no equal in the modern world. Worldwide, hens laid more than 62 million metric tons of eggs in 2009. By 2017, that figure increased to more than 80 million.

Every aspect of the chicken egg is edible, including the shell, which can be finely ground into a natural calcium supplement.

In terms of meat production, chickens can be prepared to fit almost any cultural cuisine. With the simple addition of spices, sauces, or side dishes, chicken meat can be baked, grilled, fried, barbecued, or even cooked rotisserie style.

Containing less saturated fat and cholesterol than beef, veal, venison, and other red meats, chicken meat represents one of the healthiest sources of protein available.

Without a doubt, the choice to raise chickens is a powerful force in the growing urban agriculture movement.

In the following report, we will discuss the top tips and strategies you can follow to help make your own backyard chicken farm the best it can be.

The first step is to determine your own expectations. What do you hope to gain by adding chicks, roosters, or hens into your life?

Urban chicken owners looking for a source of meat closer to home should turn to Broilers - chicken breeds ideal for quick maturation.

Amid the growing awareness of how severely factory farms produce just as much cruelty and disease as food goods, Broiler owners can rest easy knowing exactly where their meat is coming from and how it was raised.

Any homeowners looking for a steady supply of fresh, healthy eggs just out their back door won’t be surprised why chickens are the perfect companion.

Certain hen breeds can provide over 300 eggs in a year! But, be warned, just like their human counterparts, female chickens only produce eggs for a limited time. So, before adding egg layers to the family, consider what you’ll do when those feathered females reach henopause:

The commercial farming approach to the issue is the most cost-efficient.

From a business mindset, there is no motive for continuing to invest the cost of feed once a hen ceases to produce. If a homeowner shares this view and isn’t opposed to the act, then all “spent hens” can be equitably killed for their meat.

For many homeowners, an attachment forms with the creatures that they care for and interact with daily.

If killing isn’t an option, then only those willing to care for a hen until its comfortable, natural demise should consider pursuing the responsibility of owning Layers.

For reference, most hens significantly slow in their productivity after twelve months.

Depending on the breed, many chickens live for five to ten years, while the Guinness World Record is held by a hen who died of heart failure at the age of sixteen.

As with the later option associated with obtaining Layers, many urban agriculturalists are comfortable with committing to backyard chickens, even without any mind for their meat or eggs.

Just like any other pet, chickens have individual personalities, provide companionship, and, as such, are often bestowed with names.

They show affection, respond to their caregivers, and, although many breeds aren’t as prone to cuddling, almost all, given comfort and time, will feed from a familiar hand.

Some chicken owners operate with a mindset altogether different than those focused on food production or having a pet.

Just like canines and horses, some chickens are simply more attractive than others, to the extent that some hobbyists - and even careerists - selectively breed chicken heritages for the purpose of competitive exhibition shows.

Looking for a pet? The US Centers for Disease Control and Prevention does not recommend bringing chickens indoors or letting small children handle them due to the birds’ propensity to carry and transmit Salmonella in their dander and feces.