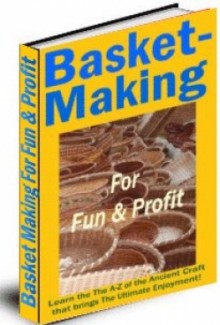 IN the process of making a basket there is no time when the individuality of the worker has a better opportunity to show itself than when he is putting the finishing touch. While the basket is still damp, all irregularities of shape which can be changed should be remedied. One side may be higher than the other, perhaps the border is not close to the weaving or the bottom may not be flat; now is the time to look for defects of form, before the rattan dries.

In soaking and weaving even the best rattan becomes somewhat rough, and little fibres protruding here and there do not look well. There are two ways of improving the surface: one is to singe the basket, which must be thoroughly dry, over a lamp; taking great care to hold it so that the fibres will be singed off without scorching the basket. Another and perhaps a better way is to sandpaper the rattan with No. o sandpaper until it is smooth. The basket is now prepared for the last process. This is either to finish the rattan in its natural color with a dull or polished surface, or to color it with stains or vegetable dyes.

Just a word as to aniline dyes. The Shah of Persia punishes with death the man who brings them into his kingdom, and we are tempted to exclaim with him "Off with his head!" when we hear of a person who, having seen the soft, beautiful coloring made with vegetable dyes, returns to the crude and quickly fading aniline colors. Laziness can be the only excuse, and even that is a poor one, for extracts of most of the vegetable dyes can be bought of dealers in dye woods in our principal cities, and the dyes are not hard to manage. Believing that only such colors as are found in natural basket materials should be used in basketry, but few dyes are mentioned in the following directions; but these suggestions will perhaps lead the worker to experiment further with vegetable dyes. It is a fascinating part of basketry, the coloring of materials, and yields large results for the time and trouble invested. Then, too, in experimenting with vegetable dyes the worker is naturally led out of doors and may discover dyes when he least expects them. For instance, one basket maker found in the purple iris a dye almost as deep as its own blossoms. The faded flowers are full of the purple liquid and, when they are rubbed on rattan, color it a beautiful shade which is quite as fast as most dyes.

Yellow from Fustic.—Before the rattan is dyed it should be soaked in a mordant or fixing bath. A solution of alum (three ounces of alum dissolved in a quart of water) is prepared and the rattan is laid in it over night. If the dye is to be extracted from fustic chips, the chips must be soaked over night in enough water to cover them and boiled next day in the same water, for fifteen or twenty minutes or just long enough to extract a bright yellow. A bit of rattan, which has been soaked in the alum bath, is dipped in from time to time to try the color. As soon as the rattan turns a bright yellow the dye should be taken off and strained, as longer boiling will turn it to duller olive shades. The extract of fustic will give surer results with less labor. It should be diluted with hot water. Cochineal added to fustic produces a dull red orange.

Brown from Logwood.—Logwood chips boiled in enough water to cover them, for fifteen or twenty minutes, yield a yellow brown. The rattan is simply soaked in the extract for several hours, or boiled in it, and then dried; no mordant being used.

Purple Shades from Logwood.—The alum mor-dant is used as previously described. The rattan is then dyed a soft purple by soaking it for a few hours, or boiling it, in the extract of logwood, obtained from the chips; or in the extract sold by dye houses, diluted to the right consistency with hot water. The addition of ammonia or baking soda will give a bluer purple.

Black from Logwood.—In the days when our grandmothers made their own ink every one knew how to obtain this dye. Boil the rattan in a decoction of fifty parts of logwood to ten of fustic, for half an hour. Remove the rattan and add four parts of copperas. Return the rattan and boil ten or fifteen minutes.

Orange from Annatto.—A bright orange is made from annatto in this way. A short time before it is required for use, it is dissolved by boiling it with a solution of carbonate of soda (washing soda) for twenty minutes. Mordant the rattan with stannous chloride (or tin crystals, which dissolve in a small quantity of water) and dye.