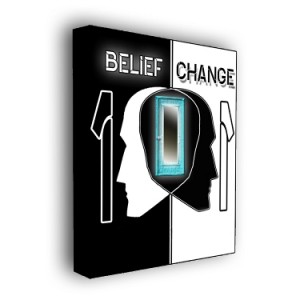 In the world of belief, there are no right answers. Everything you experience is subject to your perspective, background, and personal history. Everything you experience is relative, but it's common for human beings to forget this, to 'know' their beliefs hold some divine or otherwise objective truth. This is the cause of most wars, violence, and suffering in the world. When people believe they are 'right,' they will go to astounding lengths to persecute those who disagree, who are 'wrong.' Looking around at the current state of affairs, it's easy to see the push-and-pull mentality that collective humanity is engaged in. The Democrats are pushing against the Republicans. Religions argue with science and with each other. The poor struggle to be rich. The world is locked in this battle between opposites, all because each person engaged in the fight believes their truth to be truer than everyone else's.

We all want to be right. There's a flaw in righteousness. When one idea is right, everything else is wrong. If Christianity is the only true path to God, then every person who believes different is cursed to eternal damnation. If Democrats are right, then every Republican is wrong. If being rich is good, then being poor is bad. And the result is a divided population, a schizophrenic society that will tear itself into increasingly smaller bits until it completely falls apart. But we cannot know that Christianity is the one true religion. And sometimes Democrats are right, and other times, they are wrong. They're people after all. Being rich is good for some, but not for everyone. Some people live fulfilling, productive lives even though they are considered poor. Mother Teresa did a pretty good job of it. In essence, these beliefs cannot be proven objectively true or false, even though we act as if they can be. That's the flaw that keeps the world from living in peace.

That's the macrocosm. Inside the mind of almost every person on the planet, the same struggle takes place. This part of you believes the Universe works on the principles of scarcity, while another you believes in abundance. One part believes that looks aren't important, but another can't stop grooming and primming, hoping to catch everyone's eye. Within such a relationship, where each part strives very much to be right, conflict is inevitable. The resulting chaos will, at best, seriously minimize a person's potential, or, at worst, drive someone insane.

So how do we get out of the bi-polar see-saw act? It's simple. Any reasonable research into your own mind will conclude the same thing—that we're constantly shifting between one extreme and another on a variety of levels, because we've grown up in a society hell-bent on righteousness. This creates a complex hierarchy, condescension, and self-abuse. If we look close enough, we'll see that this right/wrong duality is not particularly useful, nor is it a requirement of the human nervous system. In fact, we can even take some space from it. Once we gain a bit of detachment from that ideal, we can replace it with something more useful. That's what it's all about—believing concepts that are healthier and/or more useful than our current models. It's not about being right or wrong; it's about being more effective in the world, creating the results we want in life.

If you accept that everything you believe is relative, that it's not objectively true or THE absolute truth, then it's possible for you to believe anything you wish to believe. To put it another way, if nothing you believe is true, that makes nothing you believe false, and that makes everything possible in the sense that the entire range of beliefs are valid. You've just opted-out of the polarity. Then it's just a matter of you choosing which beliefs are the most empowering to you. A fortunate side-effect is a growing sense of tolerance and compassion for the rest of the world, because suddenly, you've given up righteousness. Does that make sense? If not, read this paragraph again.