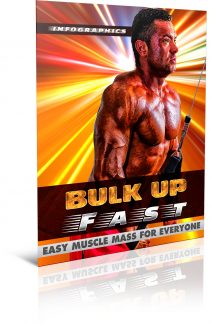 Free Report: How to Start Adding Muscle Mass in a Way That’s Fast and Sustainable

Seeing as I’m in pretty strong shape myself, a lot of these guys will ask me for advice when it comes to bulking up. They want to know how they can add muscle mass without the risk of a disappointing failure and sometimes they’ll present me with their various training programs.

All too often, I find myself rolling my eyes.

Because the training programs and diet plans they present me with are almost always far too ambitious or just plain ineffective.

Take a recent example. One guy I know paid in excess of $300 for a ‘personalized’ online diet plan and what he showed me was utter garbage.

The diet plan took into account the macros he needed to eat, sure. The calories were based on a solid AMR calculation…

So far so good.

But the diet plan itself consisted of several incredibly difficult-to-follow meal plans that no-one normal would have the time, ability, or inclination to make and eat. As soon as you see a diet plan that includes some kind of fancy smoothie, you know you’re in trouble. The same goes for diets that involve elaborate methods for cooking and seasoning fish, with nice fruit chutneys on the side.

The guy who’d bought this plan is a pilot. That means that he is often staying overnight in different countries and being invited out for drinks with his pilot friends. That meant he would have to cook the meals in advance, freeze them and then bring them in Tupperware, hoping that they would only be defrosted by the time he was ready to eat them.

It also meant that on the few nights he got to share with his wife, they would be eating different things (she doesn’t want to bulk up, unsurprisingly).

And it meant that he wouldn’t be able to go out for a drink when offered.

The plan offered no alternatives and was completely inflexible.

Well, good luck to him is all I can say!

And as you can imagine, the ‘exercise’ portion wasn’t much better. Which isn’t a huge surprise, seeing as the celebrity selling the plan is pretty stick thin!

So the idea of this report is to show you a different way. This guide will show you the basics of bulking but more importantly, it will show you how to create a program and a diet plan that you actually stick with. And along the way, we’ll point out all the usual stumbling blocks where people normally fail…

When it comes to bulking up, eating the right diet is actually more important than exercising.

That’s because building muscle happens in two stages. First, you exercise and this causes you to break down muscle tissue and create ‘microtears’. This acts as stimulation to tell the body that it needs to repair that muscle and bring it back bigger. It’s a bit like you’ve marked the muscle for subsequent repair and growth.

The next stage is the rest stage. After your workout, you’ll then go and kick back on a sofa somewhere while eating lots – ideally maintaining a caloric surplus so your body knows it has spare energy and eating lots of protein to provide the building blocks for muscle tissue. Then your body grows.

If you exercise hard but don’t get the rest, then you’ll keep breaking down the tissue but without the chance to build it back up. If you exercise hard and don’t eat enough, then your body will be in starvation mode and will believe it doesn’t have the necessary energy to spare in order to build muscle. Moreover, it won’t have the protein that it needs in order to actually create muscle.