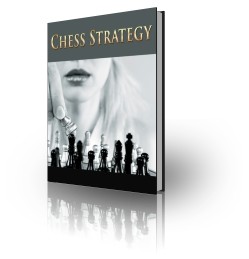 HAVING now a fair knowledge of the end-game, we should be in a position to appreciate how the middle game should be conducted. We must throughout maintain a favourable pawn formation, in view of the end-game which might be forced on us by exchanges. On the other hand, as soon as we have gained an advantage sufficient to secure the victory in the end-game, we must ourselves, by the exchange of pieces, try to reduce the position to one of the typical elementary cases which we have discussed. Now it will invariably be found that beginners are unwilling to make these essential exchanges. This is explained by the attraction which combinations involving the action of many pieces have for them. They assume that exchanges, particularly of the Queens, make the games dull. Such ideas only prove that the beginner has not grasped the nature of chess, the essence of which is stern logic and uncompromising conclusions, and this demands the shortest and clearest way leading to a mate. To the strong player, able to play logically, logic will always be inseparable from beauty in chess.

To play logically means to subordinate all combinations to a leading plan of campaign, but there is difficulty in finding the latter. An unsound scheme, even if worked out to its logical conclusion, can of course be of no value. All the same it is better than no plan at all. And in time one gains by experience, and develops a sort of instinct for rejecting from the large number of possible operations all those which, properly countered, cannot bring any advantage.

Beside practical play, which is essential in order to gain this instinct, a methodical theoretical instruction is of inestimable value, and accelerates the development of the student's mind. Now the instruction I wish to give in the THEORY of chess will not take the form of an ANALYSIS, brought up right into the middle game, of the various openings, tested and found correct in master play. Such collections erroneously bear the title of "Theory of the Openings," and are, besides, quite useless at this stage, since they only embody the results of ANALYSIS.

It is first necessary to ascertain a few leading principles, which can be taught in a most simple manner, by the exercise of common sense, rather than by applying oneself to the study of long-winded analysis. The student will no longer need to discover time-worn maxims in the light of his own weary experience, and on the other hand, these principles will help him to understand analysis, and to keep clearly before his mind's eye the common and principal lines of play, of which he might easily lose sight in the labyrinth of suggested variations.

I propose to show the application of such principles to master play, and this will give us a further opportunity of deeper study, both of the rules set out in the first part for conducting the opening correctly, and of the end-game principles, which should be well considered.

I have made the pawn skeleton with its attendant grouping of pieces the main consideration in the study of the opening; now in the investigation of the problems of the middle game, I will start from the TRANSFORMATION which the pawn skeleton has to undergo in the course of further operations. In my opinion this is the best starting-point for the choice of effective manoeuvres of the different pieces.