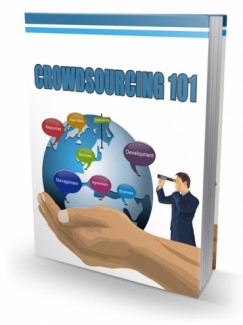 Do you have a project that needs completing but can't find any help for it? Crowdsourcing could be just the answer you have been looking for. The term crowdsourcing has been around since 2006 and it is now becoming more popular than ever before.

In fact many large companies are using crowdsourcing for their own projects.

How often do you visit the website Wikipedia? This site is an open website where anyone can write and publish to. This is actually an ongoing crowdsourcing project.

Crowdsourcing can work in different ways. You can use it to find help or ask for advice and opinions on your projects. Plus it can also be used for fund raising campaigns for all types of projects, not just for non-profit.

When it comes to completing a project you can use crowdsourcing to get feedback. Or you could use it to find people who are willing to help you work on the project. There are plenty of students and professors looking for this type of work.

When running a project in this way, the participants are not always looking for or expecting any type of reward. They chose to work on this project purely out of interest. Of course, it doesn't hurt to offer some kind of compensation at the end. If your project really took off you might want to offer a cash reward.

You may notice that certain companies are now running competitions. These are normally to help come up with new flavors or lines of products. Or they may ask their customers to select their best choice out of several new projects. This is all done via crowdsourcing.

As you can see the concept of crowdsourcing is to get a large group of people working for you. This may be by selecting new products, coming up with ideas or even getting help on a task or project.

McDonalds ran a really successful crowdsourcing project to help celebrate their 40th year in business in Germany. They asked people to create their own burger using an online burger simulator. Participants then had to promote their creation and those that had the highest votes became part of an actual trial.

The results they achieved were staggering.

12,000 people ended up creating their own marketing campaigns

Apparently this campaign is one of McDonald's most successful ever. Are you ready to try out crowdsourcing soon?

You have probably heard lots about crowdsourcing but are unsure of how this concept actually works, and what type of results you can expect. What better way to show you this than by covering a few case studies.

In 2010 Ben & Jerry's decided to launch their "Do the World a Flavor" competition. All fans had to do was to invent a new variety of ice cream. They had to create this online via a "Creation Station".

The goal of the competition was to raise awareness for fair trade ingredients. They ended up with approximately 10,000 new flavors being suggested.

All the finalists got to go on a trip to the Dominican Republic to visit a fair trade cocoa farm. The winning flavor was produced as an official ice cream.

So why did Ben & Jerry's go this route? Well first they wanted to enhance their fans creativity, and just see what regular ice cream lovers would choose as new flavors. Plus it was just a fun thing for customers to participate in.

Ben & Jerry's viewed this competition as a huge success. They loved seeing how many fans took the time and effort to come up with new flavors and names for ice cream. What better way to get your market working with you?

Recently Coca-Cola decided to get their fans to help them vote on a new flavor of their VitaminWater brand. They set up a "flavor creator lab" on their Facebook page and asked fans to create a brand new type of drink.

This creation process included voting for flavors, playing games as well as deciding what benefits this new flavor should offer. Fans were also allowed to provide input on the design too.

Over 40,000 Facebook users took the time to create an entry. It took Coca-Cola three months to go through the process and gave consumers the chance to really communicate their ideas to the company.

A big step in using crowdsourcing was that they noticed more interaction from fans the moment they created a Facebook page for this brand. In essence, the latest flavor named "Connect" was created by the fans of Coca-Cola for their fans.

Hopefully these two case studies can help you understand the concept and processes of crowdsourcing in a little more detail. Even if you have a small fan base there is no reason why you can't interact with them in some way for your business.