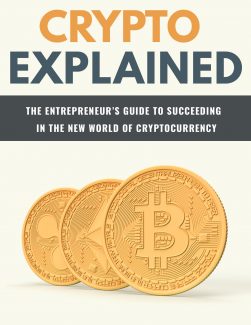 Cryptocurrency is an online form of payment that can be traded for goods or services, just like fiat money (government issued currency).

There are many companies who have created their own tokens which can be traded for their own goods and services, so there are certainly a lot of cryptocurrencies out there—nearly 7,000 according to CoinMarketCap.com, a market research website!

According to Investopedia.com, the “crypto” in cryptocurrency refers to “complicated cryptography which allows for the creation and processing of digital currencies and their transactions across decentralized systems.”

Cryptocurrencies are usually developed by teams who build in various mechanisms for issuance, usually depending on that decentralized system.
Cryptocurrencies work by using something called blockchain, which is a decentralized technology that is spread across a great many different computers and records and manages transactions.

It’s very secure because it’s not all in one central location, and once a transaction is chained, it’s recorded for posterity.

Entrepreneurs have begun to utilize cryptocurrency to further their business and increase profits. In fact, since cryptocurrencies are both investment opportunities and new financial instruments, there has never been a better time to get started!

Are you ready to dive into the exciting and profitable world of cryptocurrency and blockchain?

Bitcoin was created in 2009 (at present, nobody knows exactly who created it). Investopedia says it offers “lower transaction fees than traditional online payment mechanisms and, unlike government-issued currencies, it is operated by a decentralized agency.”

There aren’t any physical Bitcoins you can see or touch. Instead, there is a totally public ledger that everybody on Earth has access to. Bitcoins aren’t issued or backed by any government or bank, and individual Bitcoins aren’t valuable as a commodity.

All Bitcoin transactions are verified by a huge amount of computing power, though. The system consists of a collection of computers, referred to as “nodes” or “miners,” that all run the Bitcoin code and store the blockchain record of all transactions.

Since every computer running this blockchain has the same lists of blocks and transactions, and everyone can see the new blocks being filled, it’s almost impossible to cheat the system.

As of January, 2021, Bitcoin has around 12,000 different nodes (and that number is growing), so such an attack is highly unlikely.

Even if it did occur, the Bitcoin miners (the actual people involved in the Bitcoin network with their computers) would notice the change and simply “fork” to a new blockchain and make the whole attack a waste of time.

Bitcoin mining is the process by which the bitcoins are released into circulation. Investopedia explains that this mining “requires the solving of computationally difficult puzzles to discover a new block, which is added to the blockchain.”

When a new block is added, miners are rewarded with a few Bitcoins. This reward is halved after every 210,000 blocks, so the 50 Bitcoin reward in 2009 is now down to 6.25 Bitcoins.

You can use a variety of different hardware to mine Bitcoins. Some will get you better results, of course, and these are called “mining rigs.”

One Bitcoin can be divided into eight decimal places. The smallest unit is called a Satoshi (0.00000001 of a Bitcoin) because the mysterious entity who created the Bitcoin used the pseudonym Satoshi Nakamoto. If participating miners agree, the Bitcoin may be divided even further in the future.

Bitcoin can be used as a means of payment for products or services. Physical stores can accept Bitcoin in lieu of fiat money—transactions would be handled with a special terminal or with QR codes and touch screen apps.

An online business can easily accept Bitcoins along with its other online payment options like credit cards or PayPal. There are also job-site websites that will hook up prospective employees with employers who pay in Bitcoin, like Cryptogrind, Coinality, or Bitwage.

Many Bitcoin supporters feel that digital currency will become the norm in the future. In 2014, the IRS proclaimed that all virtual currencies, including Bitcoins, would be taxed as property instead of currency. This means that gains or losses from Bitcoins held as capital will be realized as capital gains or losses, while those held as inventory will incur ordinary gains or losses.

To purchase cryptocurrency like Bitcoins, you will need an online “wallet,” an app that can hold your investments. Usually, you create an account with an exchange, and then you can transfer fiat money into cryptocurrencies.

One popular trading exchange is Coinbase, which allows you to create a wallet and buy and sell cryptocurrencies.

What You Need to Know: The Risks

While cryptocurrency opens the doors to countless investment and financial instruments, because of the lack of guaranteed value, as well as its digital nature, there are risks involved that you should know about before you get started.

Barry Sibert, CEO of Digital Currency Group (which builds and invests in Bitcoins and blockchain companies) says “It is pretty much the highest-risk, highest-return investment that you can possibly make.”

Here are some of the risks you can incur:

Regulatory Risks: Bitcoins are a digital rival to government currency and, thus, may be used for illegal activities, black market transactions, money laundering, or tax evasion.

Governments, therefore, might seek to regulate, restrict, or ban the use of such currency (some already have). Other governments are coming up with various rules concerning cryptocurrency.

Security Risks: Most people who own and use Bitcoins have obtained their currency through any of many popular online markets, called Bitcoin exchanges. These are entirely digital, so as with any other virtual system, are at risk from hackers, malware, and even operational glitches.

Hackers may target these exchanges and gain access to thousands of accounts and digital “wallets” where Bitcoins are stored.