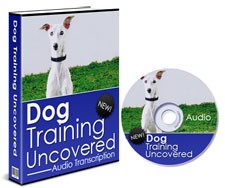 Interviewer: Now my sister-in-law’s dog who is a mixed breed--what is it--a Retriever and a Poodle --like a Cock--what are those--what is--?

Interviewer: Labradoodle thank you; she actually rings a bell to come in the house and to go out when she has to go do her business. Have you ever seen that?

Howard Weinstein: I have; in fact a lot of people --it’s sort of related to one of the most desperate questions that people ask me--especially with puppies is when will my puppy learn to tell me she needs to go to the bathroom or how can I teach my puppy to tell me when she needs to go? And some people really go to the effort of doing things as--as overt as teaching their dogs to ring a bell at the door or to go to the door and bark. The only drawback to that is when they’re grown up and they don’t need to go to the bathroom 53 times a day anymore, they only go the four or five times that you take them out, they’ve learned that if they go and ring the bell someone will take them out. [Laughs] So in some cases it’s --you wonder who trained who.

Interviewer: Yeah; I did notice she was ringing the bell an awful lo t while I was there.

Howard Weinstein: [Laughs] So I actually prefer to suggest to people that they really might not want to teach their dog to do that. It’s the same thing as teaching them to speak; it’s usually something they end up--the people end up regretting because if your dog learns to bark and that she’ll get a reward when she barks you can see where that might lead.

Howard Weinstein: [Laughs] Sometimes we need to be careful about what we teach them. If we inadvertently reinforce a behavior that we’re going to end up hating then it’s not so good.

Interviewer: Yeah; that makes a lot of sense but sometimes we just don’t know. [Laughs] Now go back to choker chains; are they pretty much passé at this point?