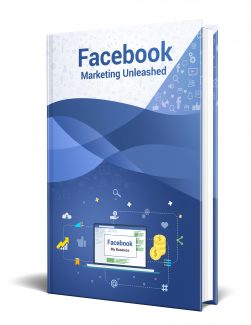 Facebook is a massive traffic monster. As of this writing, it has over 1.3 billion, and that's with a capital B, daily active users.

Think about that, over 1.3 billion people using the same website day

after day. On top of this, it continues to grow.

Also, when people are on Facebook, they pretty much stay there, and they view page after page of content. In fact, on a month to month basis, Facebook has slightly over 2 billion monthly active users.

Of all Americans, 79% use Facebook at some level or another.

If this wasn't impressive enough, the next platform that gets the highest percentage of American users is Instagram, which is owned by Facebook. Instagram clocks in at 32% of American usage.

Among US residents, 53% reportedly use Facebook several times a day.

In terms of the world's total population, more than 22% of people on the planet use Facebook with some level of frequency.

The point is, Facebook is a massive traffic monster. You really cannot afford to miss out on Facebook and its marketing potential.

If this wasn't impressive enough, wait, it gets even more mind blowing. Once people log into Facebook, the system basically keeps tight surveillance on them. And the crazy thing is that this is all done with their permission.

It's as if by watching your behavior, Facebook can make educated guesses as to what your interests are and can then show you advertising that fits those interests. Sounds pretty fair, right?

Well, this extends across the board. That's right, every group you join as well as interactions on Messenger are monitored, tracked and targeted by Facebook.

This is not lightweight targeting, mind you. When it comes to fine laser targeting of demographic groups based on individual user behavior, nothing even comes close to Facebook.

As awesome as these traffic statistics, advertising technologies, and promotion potential may be, I've got some bad news to report. Too many businesses still fail to fully leverage Facebook.

This training teaches you the best ways to promote on Facebook. It also gives you step by step instructions, so you can engage in Facebook marketing with a higher than average chance of success.

There are very common marketing mistakes that even promotion veterans commit on Facebook. It seems like even the very best of us are not immune to these common mistakes.

It's a good idea, if you want to save a

lot of time, effort and money at this point, to become aware of these mistakes.

This will decrease the likelihood that you will probably commit these same errors.

Starting Off Paid Campaigns with a Bang

Do not start off your paid campaigns with a bang. Start with a free campaign first, build your audience organically, get some consumer intelligence, then you should have the information you need to put together an experimental paid marketing campaign.

Start low and slow. The worst thing you can do is to jump in with a massive budget, and absolutely no clue.

Starting a Paid Campaign with an Immature Page

If your page is very new or there's really not that much engagement yet, you might want to hold off on a paid campaign. You simply don't have enough target audience profiling information to base a successful paid campaign on.

Many marketers use some sort of one-size-fits-all mass promotions tool for Facebook. They would discover all sorts of Facebook groups and pages, and then they would use this tool to spam those areas.

Don't do that. You're not doing your brand any favors when you do that. All you're really doing is you're spamming.

It’s only a matter of time until you get banned!

There's an old saying, "You can lead a horse to water, but you can't make it drink." By the same token, you can get a lot of people on Facebook to click on your links, but don't expect them to convert once they go to that affiliate sales page or your own direct sales page.

Why won’t people buy? After all, they did

click on your ad, right? Answer: they haven't been properly qualified. In many cases, they clicked out of curiosity. Maybe they clicked by mistake.

Whatever the case, you still did not get a sale!