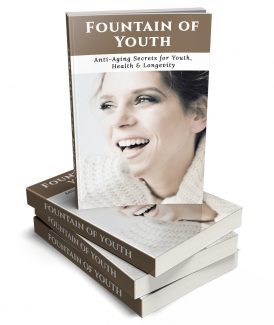 History is full of legends of magical places and potions that can make a person young again. You see them in magic movies, and you wish they’re true. However, there’re no such things. Scientists have also tried their best to see how they can reverse the process of aging. Nonetheless, all their efforts have been futile in this regard. All scientists have to offer are different theories and explanations of why we age. They haven’t been able to give the world any formula or procedure that can reverse the aging process.

This reality makes some people sad. Nevertheless, the good news is that you can slow the process. Outside of unfortunate events such as accidents and terminal diseases, you have a role to play in deciding how young you look and how long you live. You would have seen some people you thought were probably sixty years old. However, when you found out their real age, you discovered that they were in their early forties! This situation is becoming more prevalent in the modern world.

On the contrary, you might have thought at some point that some people were in their late thirties. However, when you asked about their age, to your utter shock, you realized that they were close to sixty. There’s no doubt that you want to be like such people. You were probably motivated to read this book because you want to look younger than your age. You can be confident that you’ll not be disappointed. This educative guide will help you discover the habits you need to avoid and the ones you need to inculcate to improve your looks, health, and live full years.

Many people wish they can be like Hydra, a relative of the jellyfish, who have a regenerative system that makes them immortals. If only wishes were horses… The reason we age remains a myth that hopelessly offers no answer. Many turn to religion such as Christianity that explains that we age because sin came into the world through one man, and creation is since then destined to suffer corruption.

A typical atheist wouldn’t agree, but no other explanation seems to offer any hope. We seem to be all destined to live in our bodies for a while and abandon it, or it ejects us at some point, which leads to death. In this opening chapter, we will explore the aging process and some of the most common aging theories, as well as anti-aging.

There are different types of age, depending on certain considerations. There are situations where a 45year-old woman is dating a 25- year-old man.

Many people will find this match disturbing and unethical. However, for

people who see age as just a number, they wouldn’t see anything absurd about the relationship. Below are the various perspectives of viewing age.

This is the most common type of age. It is defined as the number of years a person has lived in this world. This implies that chronological age depends on the earth’s revolutions around the sun. It is counted in days, months, and years. When people ask you how old you are, you tell them your chronological age.

Experts posit that chronological age is a limited way of looking at people because it doesn’t offer enough information about a person. It is also difficult to predict. When you look at some people, you would assume that they are in their early sixties due to how they look. However, you might be surprised that they are in their late forties. This shows that there should be other factors or ways of looking at people.

This type of age describes the development of an individual based on biomarkers. A biomarker is a significant cellular or molecular event. In other words, biological age involves looking at people based on how they are rather than when they were born. In most cases, humans follow the same biological path.

A good example of a biomarker is the onset of puberty. More complicated ones include the increase of sex hormones, increase in human growth hormone, and myelination events in the brain. It also involves the degradation of certain tissues in the body as a person grows older. So, biological age is all about the body.

If you don’t believe that people’s maturity shouldn’t be evaluated based on their body features or chronological age, you are in good company.

Psychological age relies on markers such as logic, experience, and emotions. Psychologists such as Erikson, Piaget, and Freud have developed stage theories that judge people’s development outside of physical features.

According to psychological age, a 25-year-old man might be more emotionally matured than a 56-year-old woman. Therefore, he might be able to help her to become more emotionally stable if they are in a romantic relationship. There are special tests psychologists use for measuring these benchmarks.

Many people prefer to evaluate individuals based on their functional age. This is because it offers a more holistic approach because it is a combination of psychological, chronological, and biological age. In other words, this assessment looks at when people were born, their physical features, and emotional or logical development to determine their maturity.

In the last thirty years, Gerontology, the study of aging, has progressed incredibly despite being a relatively new science. This progress shows the increase in the commitment of scientists to understand the reason our bodies grow weaker and paler over time. Below are some of the classifications of the theories they have developed to offer insight into why our bodies grow weaker and our health deteriorates.

The programmed longevity theory states that we grow weaker because certain genes in our bodies switch on and off over time. Endocrine theorists believe that we age due to the activities of hormones that control the process by causing regular changes in our bodies. Meanwhile, the immunological theory posits that the immune system is designed to decline over time, leaving people more vulnerable to sicknesses.

Some experts feel that the programmed theories are too deterministic. In response, they proposed the error theories of aging. These theories explain that aging is a product of damages caused by the environment to the body systems. These damages accumulate over time and make our bodies weaker. Examples of these theories include wear and tear theory, rate of living theory, and free radical theory.

The wear and tear theory claims that we age because our cells and tissues wear out due to exposure to harmful elements. The rate of living theory asserts that the rate of aging of an individual depends on how fast the person consumes oxygen. However, the free radical theory claims that aging is a product of the damages caused by free radicals in the environment to the cells.

This theory was developed based on a study that revealed that certain genes play vital roles in aging. During the research, the investigators removed some cells containing some specific genes in the mice’s organs. The result showed that the removal extended the lifespan of the rodents by as much as 35%.