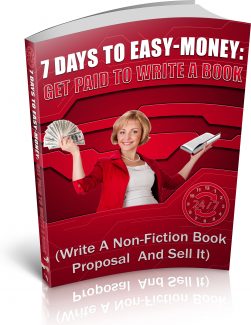 Sell your book the easy way --- sell a proposal

You can get paid to write a book. It's easily possible to make a fast $10,000, or even a six figure amount. You could even make seven figures --- over a million dollars for twenty pages of text. It sounds incredible, but a fast seven figures is certainly possible if you have a HOT, hot idea or have had an experience that hundreds of thousands of people want to read about. In his evergreen book about writing non-fiction, Damn! Why Didn't I Write That?, author Marc McCutcheon says that it's not hard to make a good income: "you can learn the trade and begin making a respectable income much faster than most people think possible".

The good part is that you don't need to write your book before you get some money. You write a proposal, and a publisher will give you an advance, which you can live on while you write the book.

Writing a proposal is the smart way to write a book. It's the way professional writers sell non-fiction. Selling a book on a proposal is much easier than selling a book that you've already written. A book proposal is a complete description of your book. It contains the title, an explanation of what the book's about, an outline of chapters, a market and competition survey, and a sample chapter.

You and your publisher: a partnership

The publisher's business is selling books. The company acquires books which it hopes will sell, and sell well. Your publisher is putting up the money to publish your book, so you need to approach the project from his point of view as well as your own.

We haven’t got the space to go into great detail about the publishing business here, but you need to know about "returns", because the challenge of returns makes publishing different from other businesses. Publishers sell books on consignment. Publishers ship books to bookshops, and if a book isn’t sold within a certain time period, it's destroyed. The bookseller strips the cover from the book and sends the cover to the publisher for a full credit. This is the "return". If a title doesn’t sell, the publisher takes a beating. As you can imagine, publishers are no more keen to lose money than you or I.

What does this mean to you as you write your book proposal? It means that your proposal needs to emphasize the ways in which you, as the writer, will take responsibility for the book's success.

You will try to ensure the success of your book by gauging the marketplace. You will work out who the likely buyers of your book might be, and the reasons they will have for paying good money for your book. You'll assess the competition for your book. You'll work out ways in which you can promote your book, so that people hear about it. You're in partnership with your publisher, and if you're prepared to take responsibility for that role, the publisher will be much more likely to buy your proposal.

Why write a proposal first?

All non-fiction books are sold on proposal. A book proposal is much easier to sell than a complete book.

Here are some of the reasons:

- It's easier to read a 20 or 30 page proposal than a 400 page book;
- It's easier to make changes in the book's concept at the proposal stage;
- With a proposal, the publisher, in the person of your editor, can take ownership of the book. It's like bespoke tailoring: the editor feels that the book has been specifically written for the publishing house.

Even if you decide to write your book first, you'll need to create a proposal once you've written it. No agent or publisher is interested in reading an entire book to assess its viability. That's the proposal's job: to ensure that your book has a niche in the marketplace. As you do your research for the proposal, you'll work out whether or not your book is likely to sell. You can shape the book at the proposal stage, much more easily than you can when it’s a huge stack of print or a giant computer file.

Sometimes you may get an idea for a book, but the idea is amorphous, it doesn’t have a real shape. You may want to write several thousand words to see whether the book becomes clearer in your mind. But write the proposal before you write more than ten thousand words, because your book must target a specific group of buyers.
How do you write a book proposal?

You write a proposal step by step. In this ebook, we'll work on your book proposal together. Each chapter has tasks for you to complete. Once you've completed all the tasks, you'll have a book proposal which has an excellent chance of selling.

- (Day One) Getting an idea for your book.
- (Day Two) Developing the idea and expanding on it. Assessing the market. Who needs this book? What's the competition for the book?
- (Day Three) Writing the blurb. Outlining your book.
- (Day Four) Researching your book proposal, and fleshing out your outline.
- (Day Five) Writing a proposal query letter. Sending your query letters to agents and publishers. (You send the queries while you're working on the proposal. This helps you to gauge reaction to your work.)
- (Day Six) Writing the proposal.
- (Day Seven) Writing the sample chapter. Revising your proposal.

I'll be including a sample of a book proposal for you to look at, so you can see what material the proposal contains. This proposal garnered an agent contract the first time I sent it out. I'll also include other samples, so that you have plenty of templates from which to construct your own proposal.