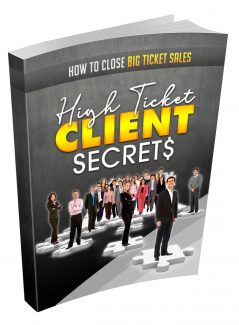 First of all, why we go for high paying clients? Who are these people? They are not just your average customers. Instead, they are those who are willing to pay you double, triple or even 50 times more than what you would earn from your average customers at the same amount of time invested. Why is that? It is because they are the high-end clients who understand more on the value you offer.

Besides, these people are who we see as “ideal clients” and “long-term clients”, who you can make a difference with and you love to work with. Let us see to these options here. Coaching 100 or even 1000 separate low ticket clients and coaching one high paying client to earn the same amount of money. So, which is more efficient to you?

Everyone only has 24 hours a day, no more and no less. Thus, our goal is to make the most profit possible with the least amount of time. Be productive by using fewer sources to produce more output. As you are working with the ideal clients, they are cooperating with you to make notable changes in their businesses and lives. In order to produce a very good result, you can say that they are actually “growth-oriented” and will go for it with the help of your expertise and support. Thus, by working longterm with these people, you will get to know and understand their needs better.

Also, you can earn more and at the same time able to have the time freedom to travel around the world, spend time with your loved ones and enjoy the life that you want. When you charge more, you will feel that you are being valued for what you are worth.

You could provide them with a better service and make a better impact without worrying that you are being taken advantage of. Not to mention, you will gain more satisfaction as the work you are doing is actually makes a difference!

Chapter 2: What It Takes to Close

How many of you ever think of “It is impossible for me or I am not sure whether I get to close high paying clients.”, “I am an introvert person. I am too shy or not comfortable to talk to those high paying clients that I need to deal with the selling.”; “Selling is not my strength. I am not good enough in selling and I will never able to sell to high paying clients.” So, with these negative and disturbing thoughts, you become not confident and automatically downgrade yourselves that you cannot do what you actually can do. Not finding anything that could act as a booster will only make you keep feeling discouraged and afraid to do things. “Do or do not, there is no try.” is one of the most famous quotes from the Star Wars series that each of you seems to know. Hence, the first step that you should take in order to sell to high paying clients is to work on your belief system.

If you have limiting belief in yourself, it will not bring you far. This is one of the key factors that holding most people back from closing high paying clients. Marketing and selling high-end services is not something that you can make a 360 degree change to overnight. Yet, it is still possible to have a sustainable business that is more rewarding and satisfying. Attracting more high paying clients is an option as it will not happen accidentally thus, needs to be done by design. If you dedicate to developing and implementing the design consistently, there you go! Most of your clients will be high paying clients in a year or less! Now, let us take a look on what is meant by belief. Our core belief system has been constructed and shaped throughout our life based on numerous events we have experienced that we perceive as true or false. Do you realize that most of our beliefs are shaped by others; such as parents, TV and social norms? However, the challenge is, most of us are unconsciously decide what we are going to believe. Instead, our beliefs are often the misinterpretations of past events.

As an illustration, let’s take a look to this analogy of belief. Think of a belief as a tabletop. Without any legs, the tabletop won’t even stand up by itself, right? So, what if belief has legs? Here is when you want to believe in something, you have the references to support the idea. The references are the specific experiences that back up the belief where by in this case, the legs are the supporting evidence. These are the legs that make your tabletop solid; and thus, it makes you certain about your beliefs.

To put it another way, I am going to give you an example just for you to get the idea of belief. Let say, if you believe that you are not good at Mathematics, you are probably have a lot of references to back it up. Maybe you have answered wrongly in class for several times, you failed the last two tests; or maybe your mother said something like this “I’m afraid you got my genes in the math department, my dear.”, and it could be many other reasons that you could refer to make a stand on your belief. So, based on the references above, you can find experiences to back up almost any belief that you hold on to.

The Power Of Belief

Let us see how strong the power of belief is. It is either your belief helps you or hurts you; or either it can empower you or cage you in forever. This short story will show you the effects of beliefs. Elephant keepers have an interesting way of keeping their elephants from running away. They tie them to a wooden peg with a rope. It doesn’t make sense on the surface, since a rope like that has no hope of holding a grown elephant. But ask any elephant keeper and he will chuckle and explain: “When a baby elephant is born, the herder ties it to a peg with a rope. At this point, the rope is strong enough to hold the elephant. The baby elephant quickly learns that trying to escape the rope is futile. And he keeps that learning with him, even as he grows up and the rope becomes far too weak to hold him.”

One day, the circus accidentally went on fire, and the elephant died. He was enormous, and could have easily ripped the pole out of the ground to run away to safety, but there was a SELF-LIMITING BELIEF in his mind that told him he would not be able to do it, and so he did not even try. Like the elephants, we often form beliefs that might be useful at first, but then hold us back in life, long after the original reasons are gone. This can be concluded by a quote by Anthony Robbins – “Beliefs have the power to create and the power to destroy.” Back to the famous quote on belief from the Star Wars series which I have mentioned earlier, the lesson to be learned could be related to a scene where Master Yoda uses the force to lift the entire crashed ship out of the swamp, moves it through the air and gently places the ship on firm land as light as a feather. Luke Skywalker stammers “I… I don’t believe it.” and the Jedi Master replies “And that is why you fail.”

A Belief That Empowering You

Again, I would like to highlight it here, despite the question of whether we could achieve the targeted goal or strategy, it is normally our skepticism or doubt that restricts us from fully dedicating which eventually becomes a self-fulfilling prophecy when things fail to work out as we thought they would. Our beliefs somehow affect how we apply ourselves and will eventually give impacts to our success. So, how to turn your self-limiting belief to a belief that empowering you? When there is a little voice say that you’re not good enough or you are not able to do it, turn it to this: “If I could help someone to get the result for themselves faster, easier and more efficiently than they could do it for themselves, that’s all the credentials I need.”