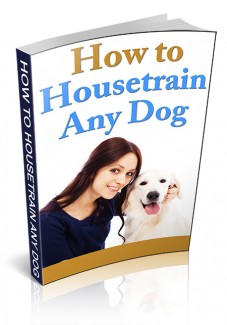 The key to owning a well-trained dog is to start off on the right track when he is a puppy. If you have an adult dog, however, who has not been trained or whose manners leave something to be desired, then he needs to be taught the basic areas of obedience. This chapter explains how you can train your adult dog in the basics of good manners, from walking to heel on the leash to sitting, staying and behaving well in the house. Some people take these things for granted, expecting a dog to be aware what is needed of him, but that isn’t the case. He has to get to know your way of doings things, while you have to get to know him and what makes him tick.

Walking on a leash without pulling is an important skill for most pet dogs.

Even dogs with fenced-in yards occasionally go for leash walks and at the very least go to the vet each year. Many pet owners adopt adult dogs or older juvenile dogs from rescue and humane organizations, and these dogs often lack leash training or may have developed poor habits, including leash biting, pulling, and jumping. We now address the concepts and control tools for basic training of adult dogs. Leash training adult dogs is in accordance with the same concepts as training them to obey the sit, down, and stay routines. Adult dogs should be started on the leash as if they were pups without any training.

To reward a dog for proper behavior, it is advisable to determine an adequately encouraging reward. These include food, a ball, or a squeaky toy. Although praise from the owner can be paired with a stronger reinforcer (like food) to eventually lessen the need to carry food, praise alone, particularly when the dog and owner have no preceding relationship and the dog is learning new things, is not a sufficiently enticing prize.

Furthermore, while food is a potent reinforcer for most dogs, some will respond only to highly tasty rewards, like freshly cooked chicken.

Once an effective reward has been discovered, it's time to pick the correct tool for control (ex. collar, leash) for the dog. In most cases, head collars offer the most reliable and humane control of dogs on leash. Most dogs can be trained to accept the head collar by use of positive reinforcement and short training sessions. Though individual dogs may appear bothered temporarily, there's no factor in the physiologic stress response in dogs wearing a head collar as opposed to those wearing a buckle collar. Head collars may not be suggested or applicable for every dog. Owners who jog or bike with their dogs in summer should steer clear of their use because they may prohibit panting.

For individual dogs that withstand the collar, "no-pull" harnesses may be useful. Like head collars, these devices work by creating mild discomfort when the dog pulls. Traditional harnesses commonly are not suitable for dogs bigger than the toy breeds, which don't pull as strenuously as larger dogs. Training a dog with a traditional harness can be done, but it provides more challenges than the other control.

Training or "choke" collars are typically not suggested for a number of reasons. First, they're generally used inaccurately by pet owners who lack the skill and timing to utilize them efficiently. Second and more critical, badly fitted choke collars sit at mid-neck and can lead to tracheal compression and coughing devoid of inhibiting pulling. In comparison, head collars and "no-pull" harnesses don't require a lot of skill or outstanding timing. They simply act as "power steering" and are relatively simple, efficient tools for the average pet owner.

The leash that the owner chooses isn't as essential as the collar, harness, or reward. However, owners who are teaching a dog to walk on a lead without pulling should steer clear of retractable leads. Although these can be fantastic for trained dogs, they can be counterproductive in beginners simply because, by their design, they promote and reward pulling. In addition, all of the devices listed above tighten up with the pressure of a retracting leash, which in effect "corrects" the dog continually even if he's walking relatively close to the owner: when an "unlocked" retractable lead is utilized with a head halter or some of the devices already stated, the dog will encounter discomfort when in the correct position and when pulling. This will confound the dog and prevent learning.

It is crucial during the early stages of training to prevent inadvertently rewarding the dog when he pulls. When the dog pulls, you should stop moving, get the dog's attention, and then reward him (for attending to you). Additionally, whenever the dog is walking quietly next to you or isn't pulling, he should be compensated, perhaps by being petted or allowed to play. Well-meaning pet owners often forget to reward appropriate behavior.

Positive reinforcement is a vital component of training: It serves to boost the strength of the dog's response plus the likelihood that he will continue to be encouraged to walk in the correct position. Whenever dogs are told what is "wrong," they must then be informed what is "right" so that they realize what is expected.

Teaching your dog to come to you when you call him, commonly called as recall, is the key lesson you can teach him. A dog who responds promptly and consistently when you call him can enjoy liberties that other canines can't. He can play in the dog park, hike with you in off-leash parks and keep out of trouble in many situations. Even if you never plan to have your dog off his leash, unexpected things happen. Collars break, leashes slip, gates or doors are unintentionally left open. When any sort of accident happens, having a reliable recall may well save your dog’s life.

Teaching a dog to dependably come when he's called isn't necessarily easy, though. Some canines do seem more naturally willing to come when called. Usually these are inferior dogs who never want to wander far from you, or they’re dogs that are so encouraged by your attention that they find coming to you really rewarding. The majority of dogs, however, must be taught to come when called. Even though you might take more time teaching this behavior than any other, the huge benefits make it worth the investment.