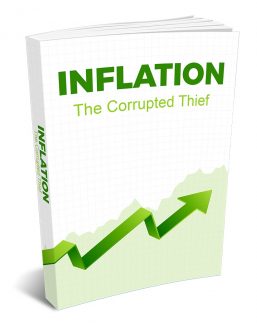 Inflation is an economic term that refers to a general rise in the price of goods and services in an economy. A rise in prices causes fiat currencies to lose purchasing power.

The inflation rate is a proxy for understanding how much the average household’s cost of living rises per year. Inflation attempts to quantify how much more it costs to buy everyday goods, such as gas, groceries, hygiene products, and other common consumer goods costs relative to how much they cost in the past.

Inflation seems harmless when under control. However, it causes an insidious drain on the wealth of the consumer and is catastrophic to an economy when unmanaged. Former US President Ronald Reagan once famously said, "Inflation is as violent as a mugger, as frightening as an armed robber, and as deadly as a hitman."

In times of uncertainty or hardship, like an economic recession, consumers don’t spend like they usually do and instead opt to save. This behavioral shift is because they expect a potential loss in consumption-ability (e.g., losing a job or falling real wages).

However, there are knock-on effects: if consumers aren’t spending, business production declines, employees are laid off, and people make fewer investments. These effects can create a vicious cycle that central banks often try to mitigate by increasing the money supply to stimulate consumption and investment. By pumping more money into the economy, consumers will have the confidence to spend more in businesses that, in turn, can invest in new or existing products and services. Thus, central banks reinvigorate economic activity to attempt to jumpstart economic growth. Central banks measure this growth in Gross Domestic Product (GDP), or the total value of all goods and services a country produces in a given year.

Inflation is usually a direct result of central banks creating money faster than GDP growth. However, this imbalance doesn't always lead to inflation: money can enter circulation without causing inflation. For example, increased investment enables technical innovations that are generally deflationary (i.e., causes prices of goods and services to fall); when businesses can produce goods and services at a lower cost and faster than consumers can demand them, prices fall. In other words, new money is not always frivolously spent. Some may save or pay down debt. Even though the money supply is greater than before, the velocity of money fell (i.e., the rate at which money is exchanged within an economy).

The three root causes of inflation, or what the Keynesian economist Robert J. Gordon termed the "triangle model," are demand-pull inflation, cost-push inflation, and built-in inflation.

When the demand for goods and services rises faster than productive capacity, demand-pull inflation occurs. This type of inflation is due to an increase in the supply of fiat currency and cheap credit. As more money is put into circulation and is easily accessible, both demand and prices rise.

For instance, if demand rises by 5% while productive capacity is only growing by 3%, demand will outpace supply by 2%. With more money chasing fewer goods and services, prices will naturally rise.

Demand-pull inflation has occurred many times throughout history. An infamous example took place in the UK from 1986–1991 when inflation hiked 4.6 percentage points to a nine-year high of 7.6%, caused by demand-related factors including lower interest rates, rising house prices, decreased income tax rates, and high consumer confidence.

When input costs for goods and services increase, such as wages or raw materials, costpush inflation occurs. As the cost of production rises, supply decreases because fewer goods and services are available. Because supply-side factors (e.g., higher wages and higher lumber prices) have changed and demand hasn’t, the producer will pass on the additional cost to consumers.

A notorious example of cost-push inflation took place in the early 1970s when the intergovernmental body known as the Organization of Petroleum Exporting Countries (OPEC) imposed higher prices on the oil market without any increase in demand, now known as the Oil Shock of 1973–1974. Though producers were earning higher profit margins in the short term, all sectors of the economy that relied on oil saw increased production costs. As a result, these parts of the economy that involve oil (e.g., transportation, plastics, construction) saw inflationary pressure on the prices of goods and services.

When consumers expect inflation to keep rising, they demand higher wages. This demand results in an increase in the cost of production, which results in higher prices. A circular dependency can emerge whereby inflation spirals out of control, known as built-in inflation.

Per figure 1, we can see changes in prices within various sectors in the US economy. Over the past 20 years, sectors with government intervention (education, housing, medicine) have seen prices soar.

We can also see in figure 1 that competitive markets with low involvement by the government (e.g., cell phone services, toys, and TVs) have seen prices fall over the past 21 years. Net-net, it appears there is a strong correlation between governmental intervention on markets and inflationary impacts.

What Are the Effects of Inflation?

Economists from the Austrian school, such as Murray N. Rothbard or Ludwig Von Mises, contend that inflation is not a rise in the general price level but rather an increase in the supply of money and bank credit relative to the volume of goods and services. As such, they argue that inflation is outright harmful because it depreciates the value of currency, raises the cost of living, imposes an implicit tax on the poorest class of people at a relatively higher rate than the tax on the richest class of people, devalues savings and thus disincentivizes future savings, redistributes wealth and income asymmetrically, incentivizes speculation and gambling, underestimates the antifragile mechanisms of a free market system, and corrupts the morals of both the public and private sectors.

Meanwhile, the Keynesian school defines inflation as an increase in the general price level caused by an increased money supply. Keynesian thinkers assert that inflation can yield a variety of positive and negative effects, including:

[Positive] Increase in labor supply —An economy operating below its production capacity has more unused labor and resources than can be used to increase business production (i.e., economic growth). With a surplus of readily available workers, hiring competition increases, and thus it becomes unnecessary for employers to "bid" for employees by offering higher wages. In times of high unemployment, wages typically remain stagnant, and no wage inflation (i.e., the rate of change in wages) occurs. When there's low unemployment, the demand for labor exceeds the supply, and employers may need to pay higher wages to attract employees. Increasing wages forces employers to raise prices, causing further inflation.

[Positive & Negative] Increase in value of scarce asset holdings / decline in value of fiat savings— Because a currency’s purchasing power falls when inflation rises, so will an individual's wealth if it’s parked in cash. Therefore, demand for scarce assets (e.g., bitcoin, gold, real estate) will rise.