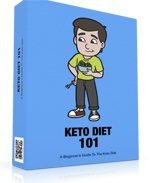 By now, you’ve probably heard about something called a Keto diet. Often, we hear the buzzwords and the extreme testimonials but don’t hear about the details. We’ve heard of it, but don’t know anything about it. The Keto diet has been making a resurgence lately. The words “keto diet” blurring into a single word that seems to carry with it its own sense of importance, as though we’re supposed to know automatically what it is, what it means, what it does.

Hopefully, this book will clear up the confusion. In the next pages you’ll discover:

- What is the keto diet, the origins, the way it works and how it’s all done

- Practical ways to diet, the benefits to this diet, why it’s gaining popularity

- Who should jump in and who might want to pass

- What to eat, and what to avoid

- And a look under the hood of macronutrients

Once you’ve gotten this far, you’ll be well on your way to a new thinner, and healthier you.

So, dive in, and be ready to explore. Hopefully, all your questions will be answered.

The Foundation of the Keto Diet

The keto (ketogenic) diet is a low-carb, high-fat diet that is designed to change your metabolism. When you eat carbs (Sugars, sweeteners, breads, etc.) your body burns that for energy. Any fats that are consumed with the carbs (meats, cheeses, etc.) are stored in the body as fat for future needs. If there are no future needs, the fat remains stored. This storage of fat is what makes you heavier.

The keto diet is designed to remove the source of the body’s fuel – carbohydrates. The body then begins looking for alternative sources for fuel – namely the stored fat. This metabolic state is called ketosis. The body becomes effective at burning fat, turning it into ketones in the liver to supply energy to the brain.

While this sounds like a lot of scary chemistry, ketosis is a good thing. It not only brings a new source of energy into play that uses up those old fat reserves, but it can also cause a reduction in blood sugar and insulin levels. These three factors when including ketosis can have some remarkable health benefits.

How does this work?

Carbohydrates become glucose when digested. Because glucose is the easiest thing to use for energy, the body will naturally gravitate to the simplest source of energy. Burning fat takes more effort, so it’s stored until some future date.

When food becomes scarce, the body begins to use the reserves stored up. This is called ketosis.

Imagine this: a simple change of selected foods can make a big difference in your overall health and body. That’s because a Ketogenic diet is more than just a diet, it’s a way of “reprogramming” your system to burn fat, not carbs.

As mentioned, ketosis is the state of the body when the metabolism changes from burning glucose to burning fat. This can be done temporarily and with some risk by fasting, but that is not sustainable past a few days. Rather than run the risk of ruining your health, the Keto diet is a controlled and satisfying way to create this metabolic switch. When the body switches to burning fat instead of glucose, it creates ketones in the blood. When the number of ketones reaches a certain state, the body reaches ketosis, meaning a quick and consistent weight loss to a healthy weight.

Ketones are the product of the liver breaking down fat into fatty acids and glycerol. From there, fatty acids are further broken down into the energy-rich ketones. It’s a cleaner and less saturated feeling energy source than glucose.

If you’re panicking because you know someone who has diabetes and heard of ketoacidosis, this is very different. Ketoacidosis is a serious consequence of diabetes when the liver produces blood acid. That is a very different physical state. Don’t confuse them; ketosis is a natural and healthy state.

Among other things, this state of ketosis can help control type 2 diabetes and help to turn around a pre-diabetic condition. Burning glucose is a process of peaks and valleys, never having a steady consistency, whereas the keto diet is a steady pull on fats leaving a constant flow.

For that reason, it’s better for the mind as well. There are those who take the ketosis diet specifically for the brain boost it gives.

Since burning fat is steadier than burning carbs, your hunger becomes “normalized,” that is the sudden rush of energy, and the resulting crash right after is no longer the norm.

The keto diet has been used since the early 1900s to control epilepsy and is still being used to help children control their seizures today. In the past few years, there have been numerous studies indicating the positive effects ketosis has on adults with epilepsy as well.

Lower cholesterol and triglycerides mean a lower risk for heart disease, even for people who are obese.

Insulin Resistance. The cause of type 2 diabetes, insulin resistance has been shown in a great many studies to have been curtailed with a moderate-fat, low carb diet. Insulin is the key to burning food into fuel for the body to use, so even if you’re not overweight, a more efficient and effective use of insulin is going to give you better results in sports and daily living.

Healthier skin. One of the most common and immediate results of ketosis is clearer, healthier skin. There are studies that include acne, lesions, and inflammation all reduced or eliminated with ketosis.

Cancer. While there are many markers that determine cancer, ketosis can “starve” cancer cells, according to some studies. Although more research is needed, there is a theory that while all cells can use glucose for fuel, cancer cells are unable to process any fuel other than glucose. Thus burning fat in the form of ketones means that cancer cells cannot proliferate and “starve.”

It’s not coincidental that some of the best known cancer-fighting foods are featured on the keto diet list.

Brain and neurological disorders. Additional to epilepsy mentioned above, ketosis has been proven effective in fighting Alzheimer’s symptoms. Patients with impairments in cellular pathways can find that their brain takes in the ketone energy in a different way, therefore bypassing the damaged cells. A European study suggested that a therapeutic use of ketogenic diet can alleviate symptoms in headaches, neurotrauma, Parkinson’s disease, sleep disorders, brain cancer, autism, and multiple sclerosis.

The study points out that though these conditions are very different from each other, ketones appear to automatically correct abnormalities in cell energy usage, in other words, making each cell more efficient.

There are also studies to indicate it can help with schizophrenia, normalizing the pathways that cause illusions, unpredictable behavior, and lack of restraints. It might even be that the lack of glucose alone is providing some sense of relief as many patients with schizophrenia were observed to eat something with high carbs before an episode.

More research is needed as the effects of ketones on some neurological issues remains unclear, but the anecdotal evidence is overwhelming. Longer life. Yes, there is growing evidence that a keto diet is a key for a longer life. In a study of 135,000 adults, high-carb diet was associated with a higher risk of overall mortality. Evidence suggests that saturated fat had the opposite effect, actually protecting heart health and preventing strokes.

With all this information it’s no wonder that the number of benefits from a steady keto diet has been proven over and over again with every test, study, and survey. It controls weight, lowers blood pressure and staves off type 2 diabetes. The mind becomes sharper, more focused and burns its fuel more efficiently.

Why is it Trending?

The ketogenic diet is trending because it gets results. It’s really that simple.

For many years, we’ve learned the food pyramid while in grade school. As it turns out, that pyramid was debunked. Many times. Over and over again, and still we’re taught that the food pyramid is the healthy way to eat. It isn’t.

The fact is, most of us have tried the pyramid way. We’ve regulated our intake, we’ve watched that the greatest amount of our diet is this and least be that. It simply doesn’t work. The myth that being overweight is all about laziness and overeating is wrong and foolish. The fact is that we’ve been told to eat the wrong things.

Then too, when we try to diet, especially following the pyramid, we’re fighting our own body’s needs. With Keto, there are a large number of foods to choose from. Where with most “diets,” you end up craving everything you see others around you eating, with the ketogenic diet you’re left feeling sated and comfortable. In fact, there are no cravings once you’ve changed out your metabolism.

The fact is that we all want to be a healthy weight, we want the energy, the clarity of thought, the health benefits that keto brings. That’s why it’s trending because too many people have found it to be that effective and that productive.

As stated before, it’s trending because it works.

Who Should Consider Keto Diet?

Let’s get this out on the table right off the bat: Anytime you want to change your diet or reboot your metabolism, check with your doctor first. That’s just common sense. Ask, get some more info, teach your doctor what it’s all about if you need to, but get as much info as you can. Having said that, keto is probably for you if you:

Are looking to make a good thing better. Say you’re in pretty good health, you’re a little overweight, but not too much and you want to lose a few pounds and feel better, make your body more efficient and cleaner. You’re looking to make your mind work clearer and your thoughts to be sharp. Even if you’re already healthy, keto can benefit you.

You’re tired of being a slave to sugar. Face it. You have cravings. It’s as bad as trying to quit smoking, you need something sweet, and you need it now. Sugar is a drug, and it’s addictive. Keto is a diet that will help you break that addiction cycle. You’ll feel comfortably full, not continuously hungry as with most diets.

You need to stabilize your blood sugar. Hypoglycemic or diabetic, ketosis handles both extremes. It regulates the blood sugars and evens out the burn rate for cells. It also means no more sugar spikes and drops.

Healing. If you have one of the items listed previously and you’re looking to make a change to encourage healing, Keto diet might be just what you’re looking for.