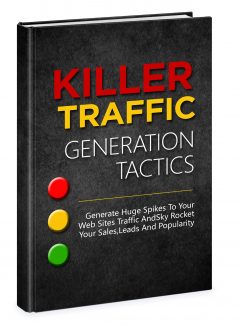 1.1 Generating Traffic – The Next Important Thing

Did you know that many people don't know that generating traffic is the next important thing to do once you have constructed a website? It's unfortunate, but it's true.

This is more than likely the cause of a considerable amount of spam sites.

New entrepreneurs start a site, wait for traffic to come, end up disillusioned with Internet-based business – and instead look only to generate traffic, rather than to produce a decent site with reasonable content and products.

So why doesn't traffic immediately stream in after someone sets up a website? The primary reason is that traffic has to come from somwhere. It doesn't just drop out of the sky.

When it comes to “free” traffic, such as organic search engine traffic, that takes time.

There are an estimated four MILLION sites on the Internet. And guess what? You're competing with those sites for positions on search engines.

Now, what's important to note is that getting “traffic” isn't all that hard.

You can always purchase five hundred thousand “hits” for $100, but if it isn't targeted to your specific category and clean (i.e. from reasonable sources), it isn't worth your time or money.

Instead, you have to find a way to generate traffic through viable methods and then recycle that traffic into repeat visits.

Traffic is the lifeblood of your business. Without a constant stream flowing through, your business will slowly begin to cease up altogether.

So don't forget: after you've created a viable website, generating traffic is the next important step.

Even more important is making sure that the traffic you generate is clean and targeted to your niche, so it actually converts into repeat visitors, buyers, and list members.

If you've spent any time at all reading Internet marketing or Internet-based business forums, you've heard time and time again how traffic can impact your website profits.

But can it really increase your profits? As I mentioned previously, it CAN, but in order to do so, it has to be targeted.

For this reason, you should avoid any traffic-generation scheme that looks too good to be true.

So how can traffic impact your website profits? Let's count the different ways:

1. It can explode your sales. Let's say you regularly have 20 unique visitors daily and most of them are untargeted. You might be able to go weeks without a single sale. Now, let's consider a situation in which you setup a joint venture and your partner sends a mailing to his or her list that generates 15,000 targeted visits over night. You could go from making less than one sale per day to over 1000 sales in a single night.

2. Traffic can impact your website profits by helping you build your list at warp speed, too. Again, consider how long it would take to build lists with the two models described above.

3. Last, traffic can absolutely expose your personal (or your brand) popularity. This can have an exponentially powerful effect on each of your successive product releases.

How else can traffic impact your website profits? If you have no traffic, you will also have no profits. It's simple.

If your site receives little to no traffic, you will have fewer chances to gain opt-ins in sales over any given period of time.

Did you know that there are two general ways of generating killer traffic? One way is “free” and the other is paid.

Both require some investment, whether it be time or money, but neither is guaranteed to make money.

Additionally, the two general ways of generating killer traffic can be extremely powerful, but it all depends on who is controlling them.

For instance, you might be selling a product that could potentially make a considerable amount of money through paid traffic.

Additionally, by using paid traffic, you might be able to automate the process completely, so that you could begin another venture.

But what if you don't have any idea how paid traffic works, what sources to use, and how to use them?

More than likely, you'll use the wrong ones or the right ones in the wrong ways. There are far more wrong ways to advertise than there are “right ways.”

Now, in contrast, if an expert, such as Perry Marshall, is using a paid advertising medium, such as Google's Adwords program, it can be an extremely effective means through which to generate traffic.