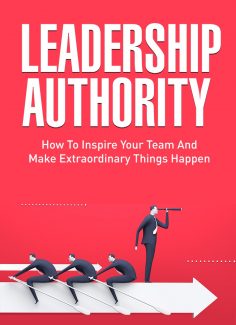 Leadership is a skill that everyone should develop and cultivate. Being a leader does not necessarily have to mean being a manager or a politician – it could also mean being a thought leader, or even just being a great parent. The ability to inspire, command and guide others is something that is incredibly valuable and that can help you to accomplish more and even raises your confidence and self-worth.

In this guide, we’re going to examine what it takes to be a leader by looking at some of the most important traits that history’s greatest exhibit. Every leader is different and part of your journey to becoming one is going to be discovering your own ‘leadership style’. With that said though, there are still definitely some common traits that you can develop and some lessons we can learn from influential figures from history. And what you’ll find is that in some ways, the most
important aspects of being a great leader are not what you would expect.

I hope this guide will change the way you approach leadership and thereby help you to drastically improve your own results.

1. A Great Leader Does Not Need to be Liked

Should a great leader be feared or liked?

The answer is that it doesn’t really matter. What’s most important is that you focus less on trying to be everyone’s friend and more on getting results.

Ultimately, a leader is someone who is trying to accomplish a goal by leverage the power of their team. If your goal is to increase turnover, then you are a good leader if you increase turnover. It doesn’t matter if you are liked along the way.

And sometimes you will have to make hard decisions or break bad news. You need to be willing to do that and not to concerned with how it makes you ‘look’. For example, if your superiors tell you that you and your team are going to need to work late, then you need to pass on that information and not make excuses. The temptation here is to complain along with your staff, to whine about how unfair it is and to make rude comments about the capabilities of your higher-ups.

All this does is to make you look unprofessional, to damage the enthusiasm of your team and to make everyone question the rules they’re being asked to follow.

This is one of the biggest problems with politics too. In order to get re-elected, a leader needs to make positive change in a short space of time so that the electorate can see the results.

The problem is that some projects only yield results over a long period of time and might even hurt the economy in the short term. Making those decisions would be political suicide and so our country is only ever putting out fires, never growing! This is something that a few famous leaders have managed to break away from. Arnold Schwarzenegger most recently discussed this and the value of being willing to make hard decisions.

You don’t have to be unpleasant, but be willing to let your reputation take the hit when it needs to!

The reason you need to care less about how others see you, is that this then allows you to take responsibility. You might be passing on orders but for all intents and purposes those are still your orders. Own them and don’t apologize.

Likewise, when things go wrong because your team was working too slowly, you need to take the flack with your superiors and take responsibility. You were leading them, so if they didn’t get the work done, that’s your fault. Throwing your colleagues under the bus will again only make you seem weak and like someone who makes excuses!

What’s more important, is that by taking responsibility for targets not being met and mistakes being made, you are creating a safe ‘buffer’ for those beneath you. They know that they can make decisions and do what they think needs to be done and not worry about the possible repercussions. You’re probably getting paid more than them, so it’s your job to occasionally get shouted at!

This extends even further to taking responsibility for your own actions and decisions. Leaders make decisions quickly and with confidence and that’s not because they always have the answers, but because they’re willing to take the flack if their decisions prove to be wrong.

The worst thing you can do as a leader is to force your team to make hard decisions. Looking to politics for an example again, we can consider the recent decision of David Cameron (England’s ex-prime minister) to vote on whether or not the country should leave the EU.

This was a decision that most analysts agree the country was ill-equipped to make. In this case, politicians were letting the general public do their jobs for them and the consequences may prove to be devastating. Meanwhile, leader of the opposition at the time (Jeremy Corbyn) was famously non-committal in his views on the subject, losing much of his party to lose faith in him. This is in stark contrast with Nicola Sturgeon – who most would agree is a much stronger leader – who has made her views on Scotland leaving the UK very clear.