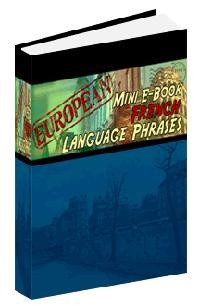 French is a Romance language originating in France but spoken in many other parts of the world: in Europe in Southern Belgium and Western Switzerland; in North America in Quebec, New Brunswick, other parts of Canada, and parts of Louisiana; in the former French colonies in North Africa and West Africa; in Haiti and Martinique in the Caribbean; in French Guiana in South America; in Tahiti and numerous other islands in Oceania. It has long been the language of international diplomacy and communication, and although replaced largely by English since World War II, it remains de rigueur for educated people around the world to have some level of basic French ability.

Like English and unlike most other Romance languages, it is not phonetic. The same letter used in two different words can make two different sounds, and many letters are not pronounced at all. In general, it's not impossible to sound out words, but suffice it to say that many experienced non-native French speakers -- and some native speakers -- mispronounce words often.

One thing to note is that final consonants of a word are usually dropped: allez (go) is pronounced ahl-AY, not ahl-AYZ; tard (late) is pronounce tar, not tard. Also a final "e" is usually silent. But if the next word begins with a vowel, the consonant may be pronounced; this is called liaison.

Stress is usually on the last syllable of a phrase, but sometimes when a word is emphasized, the stress moves to the middle of the word.

For many French words, it is impossible to write something which, when pronounced as English, sounds like the French word. Use the transliteration as a guide to liaison and the French spelling to pronounce the vowels.

A QUICK NOTE ON VOWELS: Vowels in French can have accent marks; except for "e", this doesn't usually change the sound.