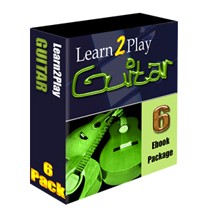 There are many different notes that a guitar can tune to. Blues players and fingerstylists are famous for using altered tunings. However there is a standard guitar tuning and this is where all students of the instrument should start. This tuning is, low to high, E, A, D, G, B and E. The high E is, on a piano, the E directly above middle C The tuning works downward from there.

Reference Tuning is tuning the guitar’s strings to another source such as a pitch pipe, piano, or another guitar. The reference pitch is first played and then the corresponding pitch (generally an open string) is played on the guitar. The tuning pegs are then turned either to the left or the right, moving the pitch of the string up or down until the pitch of he reference instrument and the pitch of the guitar are exactly the same. This is probably the most difficult method and it’s best to have someone who knows how show you a couple of times until you get the hang of it.

Relative Tuning is the process of tuning the guitar to itself. Notes and chords will sound correct as long as the guitar is playing solo, but the pitch of the entire guitar may be too high or too low when compared to another instrument. Play the low E string at the fifth fret, then play the A string open. These two pitches should be exactly the same. Move the tuning key for the A string either flat or sharp as necessary until the two strings both ring at the same pitch. Repeat this process for the width of the guitar with the exception of the second, or B, string. To tune this string you must play on the third, or G, string at the fourth fret. Return to the fifth fret to tune the high E string.

Electronic Tuning is generally the easiest form of tuning for the novice guitarist to master. This method uses an electronic tuner to locate the correct pitches. Electronic tuners are available at any music store for $20-$35. You generally get what you pay for with these things and, unfortunately, the more expensive tuners tend to be much more accurate and thus, easier to use. Purchase the best model of tuner that you can reasonably afford - it will pay off in the long run.

While each model of tuner varies slightly in its operation, the general principles apply for all models. Refer to your tuner’s operation manual for instructions pertaining specifically to your model. Almost all electronic tuners have two distinct modes: automatic and manual.

Auto mode is for more advanced users and assumes that your strings are reasonably close to being in tune. For the sake of this discussion we will cover only the manual mode.

Generally, in this mode, you select the string you wish to tune by hitting up and down buttons on your tuner. Make sure that the guitar is very close to the tuner or, in the case of an electronic tuner, is physically connected to the guitar with a %” instrument cable.

Play the string repeatedly and see if the tuner is indicating flat or sharp for the note you selected. While still playing the note, adjust the tuning peg of the string with your free hand until the tuner indicates that the string is in tune. Generally this is indicated by a green light coming on.