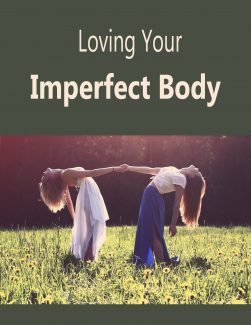 Bodies smell. They leak. They wrinkle, get blemishes, creak, and ache. They have hair sprouting from weird places, even when hair won’t grow where it’s wanted. Bodies come in all shapes and sizes, all colors, and with all kinds of flaws and differences in ability. And of course, as the children’s book says, everybody poops.

In short, all bodies are flawed and imperfect. At the same time, our bodies house our thoughts, dreams and emotions, and allow us to see, hear, feel, and experience the world. While there may be a world beyond our physical self, right now, as a living, breathing human, your body is the only home you’ve got. It’s important to love your home, even if it’s got a few flaws (which they all do).

Our body image influences our self-esteem and self-confidence, affects our physical and mental health, and changes how we move through the world. If you struggle to love your body, read on to learn more about body image and how it can be improved.

What Is Body Image?

People with a positive body image have a realistic sense of their own appearance. They know that their appearance does not define their worth as a person, and they are happy and content in their own skin.

Having a positive body image does not mean that a person thinks that their body is perfect or without flaws; rather, it means that they understand that everybody has flaws, and is nonetheless deserving of love and respect.

A negative body image can also lead to people spending excessive time and money “hiding” their flaws with makeup, accessories, or clothing, or seeking out cosmetic procedures but finding little relief from their appearance-related anxieties.

People with a negative body image can become obsessed with perceived flaws that are not noticeable or only minor to an outside observer. In extreme cases, a negative body image can lead to body dysmorphia, in which someone sees their body as radically different than it actually is. For example, a body builder with body dysmorphia may see a frail, scrawny wimp in the mirror, even though they are, objectively, built like a tank.

A negative body image can lead to poor self-esteem and low-self-confidence, and people with a negative self-image are more likely to suffer from poor mental health, including depression and anxiety.

While a negative body image isn’t the only cause of eating disorders, it is a contributor. Even in those who do not have full-fledged eating disorders, a negative body image can lead to disordered eating behaviors, including fasting, restricting food groups, dieting, binging, and excessive exercise, all of which can take a toll on health and wellbeing.

Worrying about Our Appearance

Unfortunately, today’s society makes it easy to feel bad about one’s body. Even as North Americans are getting larger, our image of the ideal body is getting thinner – and harder to obtain. For example, fashion models used to be 8% smaller than the average woman, and now they are 30% smaller – and several inches taller.

For men, the physical ideal has also shifted. Just look at the leading men in any Marvel movie, with their elaborately sculped muscles, as compared to the biggest stars of the 1950s. Certainly, celebrities such as James Dean and Marlon Brando were fit and handsome, but they didn’t spend hours in the gym or eat highly specific diets under the watchful eye of trainers and nutritionists as today’s impossibly lean and muscular stars do.

Studies show that both men and women are worried about their appearance. Estimates suggest that around 70% of women aged 18-30 don’t like their body, and around 50% try to control their weight with unhealthy behaviors. Among men, 43% don’t like their body and body dissatisfaction is growing among men.

A positive body image is important for a happy, healthy, well-adjusted life. A negative body image harms physical and mental health and can hold us back from achieving our dreams. Read on for more about how our body image is formed in childhood and adolescence.

Body Image in Childhood and the Teen Years

As infants, our first job is to figure out how our body works. At first, we can’t even lift our heads, but soon we are crawling, walking, and then running around, getting into mischief. Soon after we start learning to move our bodies, we start absorbing messages about which bodies are good, and which are bad. Studies show that children as young as three may start to worry about their weight.

While humans have always valued beauty – a walk through any art gallery will teach you that – today’s concern about body weight is newly intense and is affecting children at younger and younger ages. In 1970, the average age that girls began dieting was 14, but by 1990, that age had dropped to 8. By age 10, more than 80% of girls have been on a diet.

As well as worrying about their own weight, young children also start to judge others based on weight. Elementary school students who are obese are 65% more likely to bullied by their peers, and those who are overweight are 13% more likely to be bullied.

While children are worried about their appearance at earlier ages than ever before, puberty is still the worst time for liking one’s body. The average person’s body image hits an all-time low between the ages of 12 and 15, and self-esteem drops along with it. Studies show that by the teen years, many girls will give up many activities such as going to the beach, playing sports, or even speaking in public, because of concerns about their appearance.

Along with the decrease in body image during adolescence comes an increased risk of eating disorders. Most eating disorders begin during the teen years. Even among teens who do not have a full-fledged eating disorder, unhealthy eating patterns are common. Half of teen girls and a third of teen boys fast, binge, or use smoking, laxatives or excessive exercise to control their weight.

Evidence shows that media, including movies, television, magazines, and social media, is a big contributor to teen’s body dissatisfaction. Studies show that the more time young women spent on social media, the more likely they are to have a poor body image.

When teens read articles about dieting and weight loss, girls are six times more likely to engage in unhealthy eating, while boys are four times more likely. Over 90% of teenage girls feel that the media pressures them to be thin. While 65% think that fashion models are too thin, 46% strive to look like the images they see in fashion magazines.