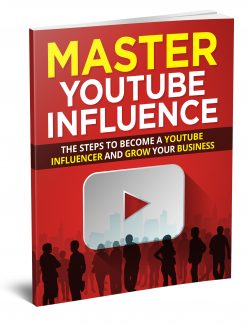 What is a YouTube influencer? It is someone that has developed a channel and has a huge number of subscribers in their chosen field. YouTube is a massive platform and it provides huge outreach for influencers. With the right influencer marketing you can set trends on the platform and make a great deal of money.

Imagine doing something that you love everyday and bringing entertainment and pleasure to millions. Every possible niche has at least one influencer on YouTube and some niches have several. There are influencers in travel, video gaming, product reviews and many more. Some of these influencers earn significant incomes.

There is a lot of money to be made as a successful YouTube influencer. You may have seen examples of the incomes that some of these people are generating. It is the best job in the world as you are highly paid for something that you love doing.

In this special report we will provide you with the advice and guidance that you need to begin your journey as a YouTube influencer. By following the steps in this report, you will give yourself the maximum chance of success.

In the next section, we will discuss some of the most famous YouTube influencers…

Learning from some of the most Famous YouTube Influencers

Some people are skeptical about making a lot of money on YouTube. They don’t believe some of the numbers that are published about the incomes that the top influencers are earning. The truth is that they are making a ton of money and use different ways to achieve this.

The number one influencer on YouTube is a guy called PewDiePie. He has been number one for a while now. He now has over 110 million subscribers to his channel. Since he started with YouTube he has created and uploaded over 4,000 videos. In a few days of launching a new video it will usually garner millions of views.

His real name is Felix Kjellberg and he is originally from Sweden and now lives in the UK. He is in the video gaming niche which is very popular. People love to watch his videos where he streams himself playing games and commentating as he goes.

It is estimated that he earned $3 million in 2021. We believe this to be on the low side as he has several different streams of income. No matter what his true earnings are as a YouTube influencer they are significant and he is living proof that top influencers can earn a fortune.

The second biggest influencer on YouTube is the channel named the “Kids Diana Show”. This channel has over 90 million subscribers and is about a girl called Diana and her brother Roma unboxing toys and participating in great adventures.

YouTube users cannot get enough of these kids opening their toys. It is hard to believe that this is so popular. It is estimated that the channel makes around $700,000 every month and it is growing. A simple idea that has made the creators a fortune.

Another success story is the channel “Like Nastya”. They have over 88 million subscribers and are catching up fast with the Kids Diana Show. As soon as a new video appears it soon has millions of views. The videos feature the little girl Nastya (Stacey) and her father having a lot of fun with her friends and more.

Vlad and Nicki is another popular kids channel on YouTube is next with just under 80 million subscribers. This channel features two young brothers that like to play with toys and have a lot of fun in their videos. Their videos often feature their parents as well.

Next up are “Dude Perfect” which are 5 guys from the US who provide comedy videos and perform a lot of different stunts such as trick shots in sports. These guys are now up to 57 million subscribers and their videos all have millions of views. There most popular video is about flipping a water bottle and has over 400 million views.

MrBeast is another top YouTube influencer that a lot of people have heard of. He now has more than 90 million subscribers and his videos are as popular as ever. He tackles different challenges in his videos. Other popular influencers include Kimberly Loaiza who is from Mexico and creates lifestyle videos and Smosh who are a comedy team.

The emergence of YouTube influencers has changed the way online marketing works in a big way. Businesses now recognize the massive reach and the power that these influencers have and they are willing to spend big bucks with them for product shoutouts and more.

In the next section, we will discuss how to start your YouTube Influencer journey…

The first thing to say here is that becoming a YouTube influencer that has the potential to earn a significant income is not an easy thing to do. If it was then there would be many more people doing it.

You have seen examples in the last section of the top influencers and what they do. All of these influencers earn a lot of money from the YouTube platform, sponsorship and more. The most important thing that you can do to start your YouTube influencer journey is to believe that it is possible for you.

You need a Goal and a Plan

The best way to start your YouTube influencer career is to set a goal for what you want to achieve from it. You need to define exactly what you are going to do and make your goal challenging and inspiring. When your goal is inspiring it will provide you with the high levels of motivation that you will need to keep working at it every day.

Your goal will define the type of videos that you will make and help you to figure out who your target audience is. It is essential that you start with total clarity about what you are going to do with your YouTube channel. This will lay the foundation for your business.

Once you have established your goal you need to create a plan to achieve it. Your plan will define the actions you will take each day to edge closer to your goal. You are not going to create a perfect plan but you do need one to guide you.

Your channel name should let users know what you are doing. Make it as easy to remember as possible. It is good to perform some keyword research using the Google Keyword Planner to get ideas for video titles in your chosen niche. Use a keyword in your channel so it helps users understand what it is about.