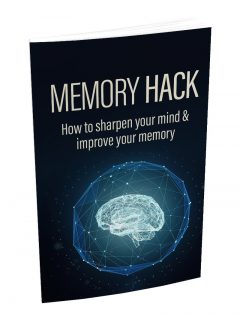 Want to become a more effective and productive version of you?

The way to do it is to strengthen your mind. By strengthening your brain, you can improve your ability to do everything else.

After all, its your brain that you use in order to solve problems, make decisions, and plan for the future. If you are stuck in a rut and if you are failing to get the results you want from life, then it’s probably time to take a look at yourself and to try making a change.

The next question: what to upgrade? A great place to start is with your memory.

By enhancing your memory, you’ll be able to improve your ability to learn and store new information. That means you’ll be able to add to your skill set, bulk up your resume, and gain new abilities that could help you to land the job of your dreams.

You’ll remember names at parties, quote movies, and more. ALL of this can be learned, and in this book you will find out precisely how to learn it and what to do with all that knowledge.

Are you ready to unlock the full potential of your brain?

Chapter 1: Neuroplasticity and the Science of Learning

If you want to boost your memory and brain power, then a great place to start is by understanding how your brain works, so that you can “hack” it.

In essence then, it is useful to think of your brain as a giant web of interconnected nodes. These “nodes” are your brain cells – also called neurons – and each one represents a different sensation, memory, thought, or action.

These neurons are arranged roughly into brain regions that have particular roles. For instance, your visual cortex is the brain region that is primarily responsible for your vision. Should you stimulate a neuron in this area using an electrode, then you would see a point of light appear in your field of vision corresponding with that neuron.

Likewise, if you were to stimulate a region of neurons in the hippocampus – the brain region primarily associated with memories – then you might experience some old memories in vivid detail.

These experiments aren’t hypothetical – they have been carried out by researchers. They work because the brain is electrical and neurons work by carrying electrical signals called “action potentials.”

An action potential occurs when a neuron reaches a certain threshold and then “fires” by sending an electrical current from its soma (cell body) down a tail called an axon. This signal will then usually travel to nearby neurons across a gap called a synapse to their input terminals called “dendrites.”

If those neurons are excited enough by this stimulation, they too will then fire and carry the message on further down the axon. This way, a thought or sensation will spread across the network, lighting up all relevant areas.

When you create a new memory or have a new experience, this will result in the creation of new neurons and new connections.

This is what we call “brain plasticity” and it essentially tells us that the brain is capable of growing and changing shape like a muscle. The more you use specific brain areas, the more those areas increase in size.

And the more skills and knowledge you gain, the more your brain in general will grow and change shape!

Plasticity is predicated on one rule that can be represented with a simple maxim:

What this means, is that if two neurons are repeatedly used at the same time, they will gradually form new connections. This is why it’s so easy to say the alphabet in order – because those neurons have formed a network that mean you can go directly from a to b to c. This is also how we learn dance routines, and it’s why we form “associations” between different events and memories.

If you try to learn something new then, you will do so by creating new neurons and new connections between those neurons. X does Y and E = F. Likewise, you will create episodic memories from everything that happens during your day, which will be comprised of networks of sights, smells, emotions, and things that happened.