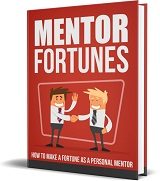 There are few experiences more rewarding than teaching what you know to someone else. The mentor-protégé relationship is perhaps the ultimate teaching experience: a one-on-one transfer of accumulated knowledge and wisdom designed to benefit both parties involved.

Protégés are a common occurrence in the business world today. Experienced people in every industry often decide to "adopt" a protégé—whether the arrangement is through a formal mentoring program, or an informal mutual decision to take a new employee "under your wing" and show him the ropes. The reasons to enter a mentor-protégé relationship are many, but the most common is when the protégé candidate shows promise from the start.

Mentor-protégé relationships can be either formal or informal. Informal mentoring relationships often develop on their own, with the more experienced person offering advice and assistance and the newcomer taking that advice to heart. Many organizations have formal mentoring programs, which can be either within the company or within the industry. For example, the Small Business Administration runs a mentoring program where retired business executives dedicate their time to developing protégés.

College interns also figure into the equation. Though protégés are not always interns, the relationships are virtually the same, while the reasoning may be different. But whether you work with a protégé or a college intern, becoming a mentor can be one of the most rewarding experiences of your professional life.

A Brief History of Mentoring

The actual origins of the mentoring process are unknown. However, the word "mentor" is derived from Homer's Odyssey. The original "Mentor" was an older man who served as an advisor to the king. Unfortunately, Mentor was rather ineffectual in his advice. However, the term in this context refers to the goddess Athena, who took on the form of Mentor to advise a younger man in the art of war.

There have been many famous mentor-protégé pairs throughout history. One of the earliest and most well-known was Paul of Tarsus and Timothy, a first-century Christian bishop. Minister, activist, and Morehouse college president Dr. Benjamin Elijah Mays served as a mentor to Martin Luther King, Jr.; and the poet Ezra Pound guided a fledgling T.S. Eliot through his literary career.

Most recently, the protégé concept has been illustrated through billionaire Donald Trump's reality television show The Apprentice, where young men and women compete for the opportunity to claim Trump as their business mentor. Learning a trade or an industry from someone with more experience has been a consistent occurrence throughout history, and it is still a viable and successful approach.

This book explains how to find and develop a protégé in the modern business world. You will discover the benefits of taking on a protégé, both to yourself and your apprentice; where to look for one, how to cultivate a relationship, and how to know when it's time for your protégé to spread his wings and fly solo.

You don't have to be Ezra Pound or Donald Trump to offer something worthwhile to a protégé. If you've had experience in a business or industry, you can benefit someone new to your field and have the pleasure of watching a new talent unfold.

Do not wait for leaders; do it alone, person to person.
--Mother Teresa

Chapter 1 – Benefits of a Protégé

It's a Two-Way Street

Most people understand that having a mentor is beneficial; the advantages are obvious. However, there are quite a few kickbacks mentors receive from participating in the process—some more apparent than others.

What's behind your desire to become a mentor? Perhaps you work for a company with a mentoring program, and you feel ready to lend your expertise. Or maybe you've noticed someone who has that same spark of motivation and drive you possessed when you first entered your career. Whatever your reason, you will find that mentoring gives as much as it takes.

Here are just a few of the benefits you will receive by taking on a protégé.

As a mentor, you may already be in a management position—and you may not. Regardless of your current career designation, working with a protégé will help you develop those skills that are essential to leading others, which could in turn lead you to a promotion.