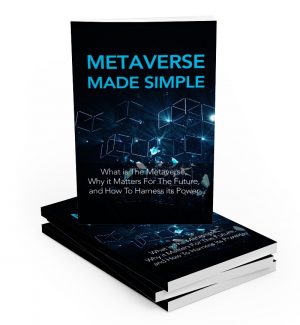 There has been a lot of talk about the Metaverse in recent years, with tech companies, gurus, and business owners all speaking about the limitless power it can give. It's supposed to revolutionize the internet, and that breeds quite a lot of excitement and worry from certain people and groups. With Facebook recently rebranding itself into the company „Meta? and redefining their commitment to building the Metaverse soon, the word is on people?s lips more than ever.

However, the Metaverse is an area that is surrounded in confusion as well. What is it? Who owns it? What can you do with it? These are all questions that people are asking, and asking in much louder voices given the recent news.

Thankfully, this Ebook will help you out, as we are going to lay out step by step what the Metaverse is and why exactly you should care about it. We want to make sure that you are armed with the answers to these hard to answer questions and that our book can cut through the misinformation about the complexities of the Metaverse.

So read on, and by the end of this book, you?ll wonder what there was to be confused about in the first place!

Part 1: What Is the Metaverse?

The desire and ability to go into a video game, virtual world, or even into the internet itself hasn?t been anything new. From “Wreck-It-Ralph Breaks The Internet” to “Ready Player One”, we?ve seen this trope in countless fiction mediums. The idea that the internet is a virtual world in it of itself, one where people can encounter one another, make interactions with themselves and the world, and even affect the real world with their choices in the digital one.

If you think of it like a massively expanded virtual world, where players don?t just control avatars on a screen with a mouse and keyboard, then you?ve got the right idea. Instead, the person accessing the metaverse is their avatar, and they can move around, speak, and travel the virtual world as easily as they can in the real world.

It will also connect the virtual world and the real world to make the pair closer than ever before. For example, have you ever seen in Science Fiction where a character might wear goggles that give them a heads up display of their surroundings? They can look at people and instantly gain access to public information about them, or do the same with buildings or items. With the metaverse, we might have that technology too.

The Metaverse might seem a little confusing, but with a little bit of open mindedness and understanding, you?ll know just what this place is, so let?s start with a simple definition, shall we?

The Definition that most people can agree on is this one. The Metaverse is a set of virtual spaces where you can create and explore with other people who aren't in the same physical space as you. Think of it like a video game MMO world. In games like Final Fantasy or World of Warcraft, players from all over the world log into servers. Their avatars are visible in game, and they can interact with one another, participate in events, and even drive the game?s economy.

The Metaverse is going to be like that, only instead of going into a video game world, you would be logging into a world similar to our own. The Metaverse will be like one huge shopping mall, where you can log into different servers that are all owned by different companies. Imagine logging into Amazon?s virtual world and ordering all your packages with simple gestures. You won?t need to take out your phone, but instead put on a headset.

Additionally, the Metaverse will be able to support your Avatars. Whether you want to buy real life items to put in your virtual room, or just have an avatar that reacts to your movements and body language, your virtual manifestation of your avatar will be just as important to the metaverse as the worlds you inhabit.