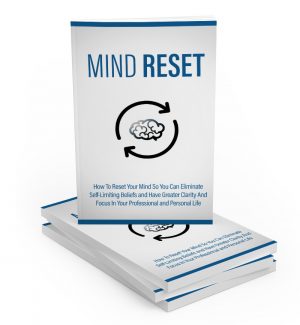 We all have goals and aims, and we all have an idea of what we would like our lives to be like. Despite this though, many of us fail to reach those goals or to actualize our dreams.

Or to put it another way, what is it that’s holding you back?

There’s a good chance that you already know what the answer is likely to be.

All of us have at some point been responsible for getting in our own way at one point or another. Either because of limiting beliefs, or because of poor habits and lack of discipline.

What possible reason could you have for this?

Often it comes down to a lack of faith in yourself. It comes down to limiting beliefs about who you are, what you’re worth… even how you’re meant to behave!
Limiting beliefs are incredibly destructive, largely because we often don’t realize they’re affecting us. They sit quietly in our unconscious brains and gradually prevent us from fulfilling out full potential.

And more than that, they make us unhappy. They give us a sense of pessimism, which can color everything we do in unflattering tones.

These beliefs act as your reference point. They inform every decision and opinion you make. They form your “internal operating system.”

In other words, every feeling, thought, and experience that you have will effectively flow out of these beliefs. If you don’t replace them with positive ones, then you won’t be able to get the most out of life – or enjoy it even if you do.

The good news though, is that the brain is plastic. It is always changing and even our very thoughts are capable of changing the structure of our DNA! This incredible fact means that it’s entirely possible to transform the way you think… to reset that operating system as it were – and to thereby live a happier and more fulfilled life.

Chapter 1: What Are Limiting Beliefs?

I’m going to start out by providing a few examples of limiting beliefs.

This can be a somewhat abstract concept to grasp, but when you see them laid out before you, it becomes much easier to understand.

The Person Who Can’t Start Their Own Business

Let’s say that you have a business idea. You’re going to provide coaching for small businesses and help them get up and started. You’ll charge a relatively low flat fee, but then the company will pay you a slightly larger fee a year later as long as their earnings have passed a certain threshold. Nice idea!

Your model involves selling direct to the customer, and the way you plan to do this is by looking for them on Instagram. You will find people who post about a business plan, then you’ll private message them and simply start chatting. If you spot and opportunity to sell, you’ll pounce. That’s the “soft sell” approach, and it means you can build a relationship and demonstrate your value before you charge.

Here’s the problem though: you’re too scared to contact anyone! Every day you put off messaging your clients out of the blue, and you can’t quite put your finger on why.

Chances are it comes down to some limiting beliefs:

• You don’t believe anyone would pay for your business idea
• You are worried that if you fail, you’ll lose something that has been keeping you motivated
• You are a “shy person” and don’t like to disturb people

Three limiting beliefs, holding you back from capitalizing on your dreams – perhaps even getting rich!

The Person Who Won’t Leave Their Current Job/Relationship

Let’s try another situation. Let’s say you’re in a job or a relationship that makes you unhappy. It really doesn’t matter which, but you know it won’t provide you fulfilment.

But you STAY THERE anyway! Why? Because you feel it’s the “best you’re going to get.” You think that if you terminate the relationship, you’ll end up loveless. Likewise, you’ll find yourself on the street if you quit your current job.

A lack of esteem means that you don’t think you can get “better.” You effectively think you aren’t “worth” more than that. And this then leads you to make some terrible mistakes.

Some people will even stay in abusive relationships because they don’t feel that they will find anything better! Some even feel that they deserve the abuse they receive.

The Author Who Throws Away His Novel

Did you know that when Stephen King first wrote Carrie, he threw it in the trash? It was his wife who retrieved it for him and told him he was being crazy!

Turns out, that we often can’t recognize our own good work – or we’re too scared to believe in it!

Now compare this to someone like J.K. Rowling who persistently kept sending out her manuscript for Harry Potter despite it being rejected over and over! Imagine if Rowling had King’s lack of self belief!