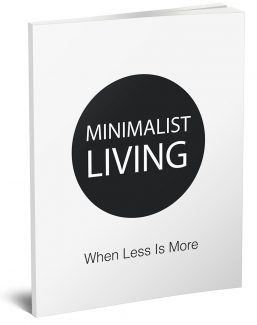 Minimalist Living: When Less is More

In this day and age, many of us are under the impression that ‘more is more’. Western society has led us to believe that the secret to happiness is to have more stuff and even to feel inadequate when comparing what we have to what our neighbors have, or what people on television have.

So what is the answer? To get more and more ‘stuff’ and constantly feel like that next purchase is going to be what changes everything? Or perhaps to try and ‘let go’ of that need for stuff and to find ourselves feeling more at ease as a result?

As you might have guess from the title of this short report, the answer lies with the latter. But the key is how you go about achieving this mindset. How do you stop yourself from constantly wanting the ‘next big thing’ and how precisely does this make you a happier person? Let’s take a look…

Are You Stuck in a Loop?

What many of us don’t realize is that we’re stuck in a kind of loop or a ‘vicious cycle’ that may be preventing us from ever being completely happy. The reason for this, is that we are so fixated on material possessions, that we’re willing to sacrifice all of the other things we need to be happy.

Think about it: if you’re like many people, then there’s a good chance that you currently feel over worked, stressed, exhausted and perhaps that you don’t spend enough time with your family, or enough time doing the things that you really enjoy. You get home late after working until 7pm and then you have to cook, eat, get washed and tidy the house all before bed time. It doesn’t leave much space for spending time with your family, or for pursuing hobbies and things that interest you.

Which is why, when you see that flashy new suit or dress, or that stunning new car… you feel tempted to buy it. You need a ‘win’. You need something to feel good. And so you go ahead and you make the purchase.

How Did This Happen?

What doesn’t help is that many of us equate success with career success. A successful person is someone who has a flash car, who wears nice suits, who has a Rolex and who is in a position of power and importance in their workplace. Nevermind whether they’re actually happy.

Advertising reinforces this view. Models on the covers of magazines look beautiful thanks to all of the expensive health products they use. To smell like Jonny Depp (and thus find love), you need to spend $50 on cologne. And to feel like you’ve accomplished anything in life, you need a TV that’s at least 34” wide. Nevermind if you actually get time to watch it.

Without meaning to sound like a conspiracy theorist, this is a status quo that greatly benefits the government and that benefits any capitalist economy. The more you feel dissatisfied with what you have, the more you work and the more you spend. That means you’re channeling more money into the economy.

It also doesn’t help that everyone else subscribes to pretty much the same view. Take a look at your neighbor and you’ll likely find that they’ve bought into the same notion. They too probably have a massive flat screen TV, nice car and important sounding job. Their home is probably filled with expensive trinkets from their travels. Nevermind if they only get to travel for one week out of 52!

This is partly down to simple human nature. ‘Social comparison theory’ states that we look to others in order to more accurately evaluate ourselves. In other words, you feel successful based not on how much money you have but on how much more money you have compared with your neighbor. And with the models wearing the Rolexes on TV…

It’s All an Illusion – Time to Break Free

Stop and ask yourself if this is really what you originally wanted. You might be feeling great that you’ve reached a position of responsibility in your job and that you’re now able to afford expensive clothes… but was that ever your ambition to begin with? Or did the pressures of living force you into that position?

Is being the head of a stapler company really that exciting an achievement?