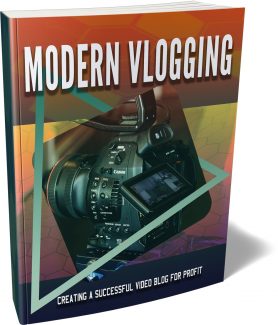 Vlogging is becoming increasingly more popular and there has never been a better time to start a vlog.People really enjoy watching high quality vlogs and some vloggers have subscribers in the millions. But you don’t need millions of subscribers to make money from vlogging. There are many vloggers that have a lot less subscribers that make a full time income and more from their vlogging activities. What could be better? Doing something that you love and recording it to share with the world and making money at the same time. This is more than a dream – it can be your reality if you follow the advice provided in this guide.

In this guide you will discover what a vlog really is, some great and profitable ideas for starting a vlog, how to start your new vlog with maximum impact and how to promote your vlog so that you increase your subscriber numbers and your potential to make money.

We have answered all of the most common questions about vlogging in this guide and provided you with a step by step plan to create a successful and profitable vlog. You need to take action and be totally committed to your new vlog. It is going to take time and effort to get where you want to be.

We have left no stone unturned in this guide. You will know exactly what is expected of you and the highs and lows of vlogging. Consistency is everything with vlogging as you will discover as you read through this guide.

Once you have read the guide you will have everything that you need to start your journey to successful vlogging. So we recommend that you read this guide in full first and then go back to the start and follow the recommended action steps.

We wish you every success with your new vlog!

A video blog (vlog) or “vlogging” is the setting up of a specific channel on a video sharing site such as YouTube and uploading videos on a regular basis. The goal of your vlog is to provide engaging content in a specific niche that will create a reaction from viewers and grow your following or subscriber base. Vlogging took off around ten years ago when video sharing sites such as YouTube became really popular. Videos are a lot more interesting than text based content. Most people would sooner watch a short video than read hundreds of words of text.

Can vlogging really make you money? Yes it certainly can, but you need to go about it in the right way which is what this guide is all about. We will show you how to choose a niche to vlog about, the best video platform to use, how to set up your channel correctly and a lot more.

Why should you start a Vlog?

There are many good reasons why you should start a vlog right now. The first of these is that video has tremendous impact these days. YouTube and Facebook currently dominate the world of Internet video. There is a reason that both of these platforms introduced live streaming video – it is what people want! People like to watch videos and in particular they like vlogs. Some of the most successful channels on YouTube are vlogs. Once you start to get a following for your vlog the word will spread quickly and you will get a lot more subscribers.

Vlogging is one of the best ways for you to share your talents, ideas and thoughts about a subject. When you create a vlog your audience is not expecting Hollywood movie quality – in fact quite the opposite. A vlog needs to be natural and casual and really connect with the viewer.

There are all kinds of successful vlogs out there. A lot of travel vlogs allow the vloggers to travel around the world through donations, sponsorship, affiliate marketing and other revenue opportunities. Take a look at the popularity of reality TV – people like to watch other ordinary people doing things that they love.

If you have a specific talent then you can show the world how you put this to good use. Once you start to build a following then there will be opportunities for you to market your skills. By demonstrating that you are really good at something in your vlog you are bound to get requests from people interested in hiring you.

Some people start a vlog because they want to document their life and create a memory to share with future generations. They have no financial aspirations for doing this. This is a guide about making money from vlogging so we wouldn’t recommend this approach. However a number of vloggers who started off in this way have made passive income.

There are already some very successful vloggers on YouTube that make a significant income from their vlog. People like Roman Attwood, Lilly Singh, Casey Neistat, Zoella and Alfie Deyes are all good examples.

These people all have deals with brands where they make a significant income. Brands constantly scour YouTube for new vloggers and if they find good ones they will approach them directly with deals or sponsorship. There are so many opportunities to make money with vlogging.

You can start vlogging right now. There is no need for you to purchase expensive camera equipment to start with. If you have a smartphone which can record high quality video then you are good to go. However if you can invest in good recording equipment we would always recommend this.

When you have finished shooting your footage you can then upload this to your computer and use free video editing programs such as Windows Movie Maker for Windows machines or iMovie for Mac. Yes there are better video editors out there, but you don’t need them to get started.

You don’t even need a website. Use YouTube as your vlogging platform. It is a good idea to have social accounts such as Facebook, Instagram and Twitter and build a following on these so that you can let everyone know when you have launched a new video.

A number of vloggers use affiliate marketing to generate revenue. For example there are a number of successful make up and cosmetics vlogs and the owners promote products and make commissions as an affiliate.