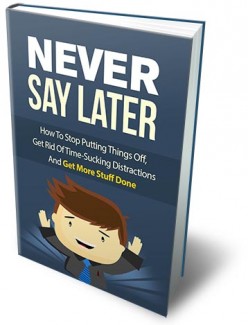 Step 5: Feel The Fear But Do It Anyway

If I have made achieving goals sound easy, then I apologize. It isn’t as difficult as most people think, but it also isn’t easy. The main reason that it is difficult, even if you break it into small chunks like I have suggested is that you’re going to be overwhelemed with fears when you first start, and pretty much every step along the way, although it does get easier the longer that you have been working on a goal.

Why You Have Fears And What To Do About It

Fear can hold us back from achieving our goals, and it can be the number one factor for our lack of success. Fear doesn’t just manifest itself once and then disappear either; it comes in a vicious cycle that keeps you from success. For example, let’s go back to Robert and his goal of getting in shape. Reasons vary why someone would want to get in shape. Some people just want to be healthy and live longer, others are doing it for the chicks/dudes (a perfectly acceptable reason believe it or not) and some have serious reasons for doing it like a heart condition, diabetes or they want to become an actor or recording artist and want to be fit and trim to do it.

Robert’s reason - since he’s imaginary I’m imagining - is that he wants to be healthy and live longer. But the first time that Robert heads out to the track to run his 24 minute mile the fears will start plaguing him. What if this doesn’t work? You’ve been overweight your whole life, what makes you think that anything will change now? You’re too old to get in shape. You could lose weight and get healthy and then get run over by a truck, so why not enjoy life?

All of this self-talk that Robert is having (which will very likely be similar to the self-talk that you will have) is based in fear. All of it. And Robert has been letting fear keep him from losing weight his entire life. He starts having these fears, and they start changing his mind about his goals. There is only one thing that you can do with these fears. Ignore them.

The first step in learning to do so is being honest with yourself. You know that the lies that your fears are trying to tell you are just that - lies. But you want to believe them so that you don’t have to put forth the effort required for change. Don’t feel bad - it’s all part of the human condition and all of us do it. But try to look past those fears when they pop up and truly ask yourself if any of the things that the fears are telling you are likely to be true. Then, ask yourself if you would want to accomplish the goal even if it did turn out to be the truth. You’ll find that the answer will always be yes -you would.

If you are struggling with fears, the best way to overcome them truly is by ignoring them and doing it anyway. Once you have accomplished a few of your checklists, and have reached a milestone or two, you’ll notice that while the fears do not actually go away, they do get quite a bit less persistent and quieter.

If you are serious about your goals, you’ll complete them anyway, even in the presence of fear, and eventually, overcoming those little voices in your head that we all have will be as easy as tuning out low music or muted voices from the neighbors in the next apartment. You will have overcome fear. Now, let’s deal with procrastination.

Overcoming procrastination isn’t going to be easy. If you are like most people who have struggled to reach their goals, you have probably made a habit out of procrastination. It is difficult to break a habit but it can be done. The first step is obviously making sure that you are aware of what is expected of you - what you expect of yourself - and that means putting your goal checklist for the week in a place that you will constantly see it.

As previously mentioned, I suggest putting it right over the toilet, or on the bathroom door, so that every time you come into the bathroom you will see it and be reminded of what you need to do that week. However, as the week continues, you will almost certainly find yourself coming up with reasons why you don’t need to complete the items on the checklist today -even if you have the time. That can be deadly to your plan, because everything rides on you taking those small steps to reach your goals. Here is another (surprise!) step-by-step checklist that will allow you to overcome procrastination when it crops up.

Stage One: Identify the Problem

You’re likely not just procrastinating out of laziness, but even if you are, you need to identify the problem. If you look at your list, and you realize that you could spend the next thirty minutes completing one of the items on it, but you don’t want to do it, or want to put it off until tomorrow, you need to identify why you are feeling that way.