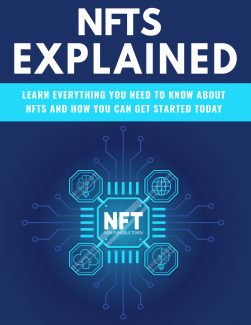 One new asset you might have seen exploding onto the market is the NFT or Non-Fungible Token.

The question is: are they worth the money (or the hype)?

Some experts feel they are “a bubble poised to pop,” while others believe NFTs are going to change investing forever.

In this special report, we’ll take a close look at what NFTs are, how they can help your business and so much more.

What exactly is an NFT?

It’s a digital asset that represents some real-world object like music, art, in-game items, or videos. NFTs are bought and sold online, often with cryptocurrency, and are usually encoded with the same underlying software as many cryptos.

NFTs are becoming well-known now, though they’ve been around since 2014, because they’re an increasingly popular way to buy and sell digital artwork.

Conti and Schmidt report that “a staggering $174 million has been spent on NFTs since November 2017.”

NFTs are usually either one of a kind, or one of a very limited run, so they have unique identifying codes. Arry Yu, chair of the Washington Technology Industry Association Cascadia Blockchain Council and managing editor of Yellow Umbrella Ventures says they “essentially … create digital scarcity.”
This contrasts with most digital creations, which are almost always practically infinite in supply.

So, cutting off the supply of a given asset should raise its value (assuming it’s actually in demand at that moment).

Many NFTs, especially nowadays, have been digital works that already exist in some form elsewhere (like securitized versions of digital artwork that’s already out on Instagram).

Why are people willing to spend so much money on something they could screenshot or download elsewhere?

“Because,” say Conti and Schmidt, “an NFT allows the buyer to own the original item.”

Also, since it has built-in authentication to serve as proof of ownership, collectors can amass an online collection. Some collectors even value “digital bragging rights” almost more than the item they’ve purchased.

People are starting to answer the question: how do we assign value to something that doesn’t exist? What is a digital object worth?

“While we were all waiting for virtual worlds to spring up,” says Joe Procopio, entrepreneur and founder of TeachingStartup.com and GetSpiffy.com, “Facebook was selling out of Oculus.

While we were laughing or wincing at the pop culture references in Ready Player One, Minecraft was letting its players build their own blocky starter-kit societies.

And while we were debating the ‘realness’ of Bitcoin as a currency, someone was paying 170,000 real dollars for a CryptoKitty.”

If you’re an entrepreneur, you can’t help but wonder about the method of calculation on that $170,000 digital cat’s valuation.

The value of that CryptoKitty was determined by the expectation that its value would increase over time. That same speculation “drove the great alt-coin rush of 2017, and some painful lessons resulted in a hardening of the rules of value for digital currency.”

Many have found that some of the “must-haves” for almost every type of token come down to scarcity, supply and demand, ability to transact, and tangible proof of ownership.

The digital coin is still only a virtual piece of money, and ownership is still only in the virtual sense. But thanks to the implicit rules in the blockchain (documented by smart contracts), virtual ownership became “real enough.”

What’s the difference between an NFT and cryptocurrency then?

NFT stands for Non-fungible token. A fungible asset, like physical money and cryptocurrencies, can be traded or exchanged one for another.

They’re also equal in value. One dollar is always equal to another dollar and one Bitcoin equals any other Bitcoin.

In fact, cryptocurrency’s fungibility makes it a trusted means of conducting transactions on the blockchain.