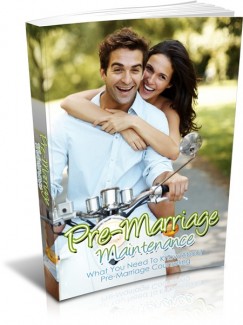 Taking as much care as possible to avoid as many pitfalls will help the marriage get off to a good start and stay that way for much of the time. Pre marital counseling is one way to getting off to a good start because at this juncture the couple will learn about almost every different aspect of how to work at a marriage and what they can expect to encounter.

One of the more topics explored would be the one on religion. This of course for most seems to be rather a simple matter and if both parties are not really practicing any particular religion they may not see any real importance in this particular area within the marriage. However for the pre marriage counselor, this is a very important area that should be thoroughly understood for the benefit of both parties and for the eventual well being of the marriage and future children the couple would intend to have.

The aim here is to create some level of clear understanding and respect for all the various religious elements so that both parties will be better able to avoid any future conflicts that may arise successfully and without damaging the relationship in any significant way.

This is especially important for those intending to be part of, or are already in an interfaith relationship. This particular type of relationship has the potential of presenting even more problem than any other normal relationship, thus needing even more pre marital counseling care and guidance. In the initial stages both parties will not be able to understand the possible impacts of being in an interfaith relationship, but as time goes by it may become more difficult to cohabitate peacefully and happily while still wanting to practice one’s own religious beliefs, thus the need to explore and discuss matters pertaining to religion openly..

Chapter 5: Coming up with ground rules

As with every endeavor, marriage also require some ground rules in which both parties are expected to commit to for the betterment of the relationship.

The process of establishing such ground rules should ideally be done as a couple and if possible with the added help of an experienced pre marriage counselor.

This is very useful as it will help both parties go into the relationship with a clear understanding of what is expected of them both.

The following are some areas that should be covered by the ground rules to ensure the relationship stays the best it can be:

Laying down the perimeters of acceptable behavior and unacceptable behavior, would be a good place to start, although both parties already have some idea of each other’s personalities, the boundaries are necessary to ensure what is presently considered normal does not change in anyway and where unpleasant surprises are the call of the day.

Other ground rules should ideally cover the topic of finances. This very delicate matter is usually the main cause of problems within any existing relationship and without the ground rules in place, there would really be no guidelines to follow to ensure conflicts are kept at bay. Understanding the spending habits and commitments of both parties and learning how to reach compromises will help both parties eventually accept each other’s financial commitments and needs, thus creating a clearer picture of what to expect in the future.

Communicating is another very important ground rule to establish very early on in the relationship. Being able to communicate freely and openly should be something that insisted upon as this will give both parties a chance to be honest and forthcoming with their own thoughts and feelings within the relationship.

Every human being has aspirations in life, and while some are quite detailed and extensive other may not really have that much to aspire about. However everyone should be given the opportunity to pursue such expectations without any outside pressure or discouragement.

What Do You Expect

For those who are lucky enough to have a clear picture of their expectations, finding someone who will fit the profile would be one way of going about choosing the ideal partner.

However for most people who tend to go with the flow, it might be harder to eventually be more firm with their expectations in the relationship.

The importance of expectations being expressed very early on in the relationship cannot be emphasized enough. This will allow both parties to be aware of the expectations, so that they can decide if they can be part of such expectations or if they would prefer to move on to another relationship more fitting to their agenda.

Expectations are often good guiding tools to have as long as they don’t become a dominating and uncompromising factor in an individual’s life. With expectations in place the individual is better able to adjust and also get the other party to understand the stand taken on certain elements.

A pre marriage counselor will be able to guide both parties on the way to decide and document these expectations in a more logical and realistic way, thus giving both parties an insight of what to expect within the relationship and its future direction.