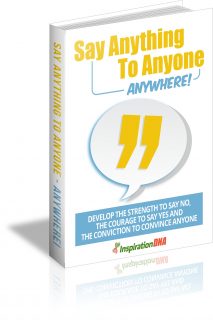 Most of our problems in life come from the fact that we either agree to too much or we refuse things that we later repent. Though we may be highly educated, there is one department that most of us are lacking in… that of saying yes or no at the right place.
This e-Book delves into that collective shortcoming of the human race. If you think about it, this is quite apt. When we talk about saying anything to anyone anywhere, we are basically dabbling about the two extremities—yes and no. Either you are agreeable to what you are told, or you are not. But, it is saying it out aloud that matters.

Sometimes when you agree to too much, you might find too many things on your platter and though you have the talent to do an expert job of it, the shortage of time could be your downfall. You find that you are not able to do justice to everything that you have taken up. As a result, you lose your credibility, and people lose faith in you. Though you are an expert, your downfall was that you took up too many things. Naturally, you had to make a short shrift of things and everything did not work out as you had planned.

The other extremity could be a problem. There are some people who refuse almost anything. They have paranoia about accepting anything. Refusal is their default reaction. This could be their undoing though, because by unthinkingly refusing everything that comes in their way, they are probably losing out on a lot of opportunities. They are failing to notch up experience and goodwill. They are keeping themselves away from self-development and they are earning much negative press in the process because people usually do not like being refused something.

And then, there are times when we have a single obvious answer between yes and no, and we know that the answer we are giving out is definitely going to hurt the other person. But, we have no alternative. There is nothing we can do. What do we do in such cases?

We need to learn how to accept anything in an elegant manner. We should not take up too much and we should not take up anything that is against the principles that we have set up in life. At the same time, we should make sure that when accepting something, we are getting what we want out of it… whether it is monetary compensation or creative satisfaction or goodwill or whatever it is that is our motivation at the moment. We should also make sure that we are not coming across as too desperate when we say yes to something. Even though we may be blessed with amazing talent, if we are too desperate, then people develop a low opinion of us.

Saying no requires some special skill as well. Most importantly, we must do our best to make sure that the person we are refusing doesn’t take it too hard. There should be no bitter feelings because that can create a lot of unwarranted problems in the long run. We need to justify our stance when we are refusing something. We should tell them what the reason is, and, if possible, give them an option by which they can get their job done. That usually takes care of the bad feelings part because the person whom you have just refused understands that you have not done it out of spite or because of a grudge that you have with them.

You need to learn how to strike the right balance. Between saying yes and no, there are a lot of things that you have to consider—a lot more than what you probably are considering right now—and when you eventually give your answer, you have to make it sound right.

There are times when you will have to give a quick answer. For instance, if someone you are visiting asks you to stay for dinner, you have to give a quick answer. The answer has to sound genuine and still you have to take care you are not doing anything that you do not want to do. This requires you to quickly understand the different parameters that you should think of when agreeing to or refusing something and give prompt answers that ring true.

In this eBook, we are going to speak a lot about how you can do this… say yes or no without sounding too confident or too diffident, and make sure you are not harming yourself or your near and dear ones in any way by giving your responses to the situation. You will learn how to quickly analyze a situation and give the right answer according to the situation. This is basic knowledge that everyone must have, but some people need to learn it in order to implement it in their lives.

Say Anything To Anyone - Anywhere!

Develop The Strength To Say No, The Courage To Say Yes And The Conviction To Convince Anyone

Why We Say Yes When We Want to Say No

There are a lot of situations where we end up saying yes when we actually want to say no. We do such a thing and then we rue what we have done. In most cases, you cannot go back and renege on your promise. So, you are faced with a situation where you have to do something that you do not want to do, and you have to do it within a particular timeframe, which makes the issue more difficult.

So, why do we do that? Why do we end up saying yes when we should actually have refused something outright?

It is our inborn tendencies that make us do that. There are several reasons why we end up agreeing to everything that comes our way. Maybe it is the need for appreciation, or maybe it is our greed that makes us think that we can do everything that is offered to us. There are so many different reasons why this may happen, but the end result is usually always the same. It makes us feel miserable for having agreed to do what we didn’t want to.

In this chapter, we shall probe into the various reasons that make us accept things as a sort of a reflex action. We shall see why it is our inherent nature to agree to things, and why refusing takes some bit of effort. We will also see how to analyze a particular request that comes our way in such a manner that we can understand whether the best answer for that would be an acceptance or a denial.