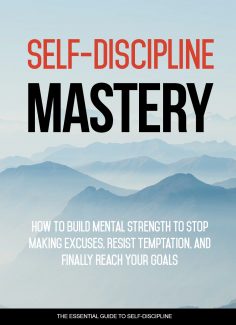 Introduction: Why Self-Confidence Changes Everything

If you could enhance a single trait about yourself with the objective of improving your success, your happiness and your effectiveness, what would it be?

I‘m here to tell you that 99% of the time, you‘d get the best results by enhancing your confidence.

In other words, all those self-help books that tell you to take supplements to make yourself smarter, to work out more, or to stick a lump of butter in your coffee are barking up the wrong tree. With self-confidence, you can genuinely accomplish anything.

This might seem like the kind of advice you get from a poster with someone punching their fist into the air in front of a sunset. It might sound like the sort of thing that your mother would say to you but which you suspect she may not really mean.

But it‘s true. Self-confidence really does change the way you approach every situation, the way that others see you and the way that you come out of every interaction.

Well, let‘s start with a little bit of evolutionary theory.

What does this have to do with confidence?

Well, it comes down to the crucial importance of social interactions. That is to say that human beings are naturally social animals. We are pack animals just like dogs or wolves, although a human ?pack‘ is actually known as a tribe.

Being a member of a tribe would have helped us to survive by giving us strength in numbers, access to potential mates, greater resources etc. Those members of the tribe that would get ostracized and left out in the cold would end up dying out as a result of less access to food and resources and less protection from predators.
So maybe Uncle Jimmy died out because he was unsocial and he got evicted from his group. Survival at least partly comes down to a popularity contest. Think of it a little bit like Big Brother!

These alphas get their choice of mate, they get first pickings when it comes to food and they get to sleep on the most comfortable pile of hay in the cave.

Point is, that being alpha means you are more likely than anyone else to survive and to thrive even more so. If you are an omega, if you are the jester of the group, then you don‘t get fed as well and you become much more likely to get killed when you go out hunting and gathering.

So, how do you ensure that this doesn‘t happen to you?