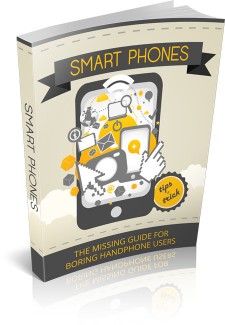 Chapter 6: Using the smartphone as a learning tool.

Smartphones are amazing tools, not toys and so many kids are carrying them around on a daily basis. What makes the smart phone such a powerful learning tool is mobility and it allows the parents to encourage anywhere, anytime learning.

Teachers have found creative ways to use smart phones as educational tools. Students can:

Use the camera to take pictures or videos. They could take videos of their lab experiments. This gives students the opportunity to review their experiment and to improve it.

Use the built-in microphone to record interviews. The voice recorder can help the student to remember homework assignments, memorize terms and practice foreign language pronunciation.

Use the browser to perform research. The smartphone provides so much information, which includes science textbooks, which are online. If they have a question they can easily look up the answer by using the internet.

Use the keyboard to jot down their notes anytime, anywhere.

Use Google information to add to class discussions. Google is also accessible by text message. Students could send a message to Google to define a word and receive a list of definitions.

Use it in chemistry classes as it helps out with the periodic table when looking at atomic mass.

Use the smartphone as a calculator in Algebra, Algebra 2 and Geometry, or watch math videos.

Use the phones to do their homework on- the-go and to communicate with teachers.

Use the built in contacts/address function as a vocabulary study list. Students enter the words, in the “notes” section of the contact and enter the definition of the word. They then create a “group” for each separate list, which makes it easy to keep them organized. Students can quiz themselves on the meaning and then tap the word to find the definition.

According to the Campus technology article, smartphones today “have the computing power of a mid-1990’s computer “For such a tiny device, it is a lot of power. As a learning tool the smart phone could be utilized more, because they are here to stay.

Social networks such as Facebook and Twitter are determining new forms of social interaction, dialogue, exchange and collaboration. These sites enable users to swap ideas, to post updates and comments. Social media are helping people to follow breaking news and keep up with friends.

A new report from comScore shows that both Facebook and Twitter users spend more time using these networks on mobile devices than they do on traditional computers or laptops, which leaves no doubt that the future of social networking is mobile. Analysis done by comScore indicates

Facebook and Twitter are among the largest social networks and both brands have developed a growing mobile audience. As more and more people can afford smartphones and mobile broadband, due to lower costs the popularity of social media, particularly Twitter and Facebook has shot up dramatically.

This sets the path for changing the way we live, how we work and how we communicate. The success of a networking sites such as Facebook or Twitter, or even Google + is easily determined by its accessibility. If users can’t access a social network via mobile with a half decent experience is doomed for failure.

Increased accessibility to social networks on smart phones could however bring about more stress. A study by a psychologist Richard Balding demonstrated a link between compulsive behaviors and increased smart phone use. According to Balding it is very likely to see an associated increase in stress from social networking, as smartphone use is increasing. He encourages people to take a break from being connected all the time. There could be a risk that stress and tension that builds up from being engaged all the time, could have a negative impact on relationships.

Another side of using the smartphone to access social media is the storing of every personal detail on a single device. With some basic social engineering skills peoples’ dependence on social media can be exploited.

Smartphones are designed for sharing, but be selective with what you choose to share.

VoIP is an acronym that stands for Voice over-Internet Protocol. This form of technology allows someone to make free or cheap calls using their smartphones, but instead of using the mobile operator network, they place the call over the internet.

This allows VoIP providers to offer previously expensive services at a much cheaper rate than traditional phone operators.

To use VoIP on your smartphone you should have access to internet either by connecting to Wi-Fi network or the data network of the mobile operator. You would need at least a monthly data plan of around 4-5GB, since VoIP technology uses a lot of traffic.

You would also be required to have a mobile VoIP app installed on your phone. There are several specialist companies that have developed software and technology that allows it to be used without expensive hardware. Some of the most popular are:

Skype allows free conversations and texts between users via handsets and personal computers.

Vonage offer VoIP calls to their customers via existing broadband connections, through PC or smartphones.

Rebtel also offer a complete range of VoIP services and in addition they offer a range of apps freely downloadable from their site for Android, Blackberry and iPhone.

To make VoIP calls you would have to register with one of the companies above. After adding your friends or family to your contact list, they would have to install the same provider as you on their phones.

As soon as they are registered you are able to make calls in the same way as you would be using traditional means.

Mobile VoIP technology is one of the most useful smartphone features that allows users to make free or at least cheap calls.