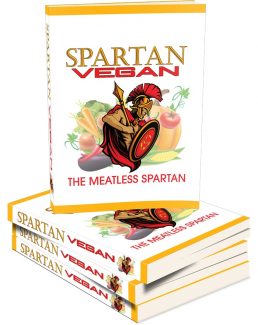 “Vegan Warrior: Green Athletic Fitness Blueprint” contains proven steps and strategies on how to begin your own vegan diet, how to maintain and acquire the type of body you wish on a vegan diet and presents to you athletes and prominent individuals who debunk some of the greatest myths when it comes to the world of vegan eating.

Many individuals believe that a vegan lifestyle is not a lifestyle conducive to muscle building or psychological health. Many believe vegans cannot possibly obtain the protein sources they need in order to keep their bodies working efficiently, and others believe that a vegan lifestyle is not one that should be held for the long haul. Many people are under the assumption that, in order to live a healthy and productive life inside (and outside) of the gym that one has to consistently chug protein shakes and energy supplements in order to improve performance.

Well, we are here to let you know that none of these are true. This book will have real-life athletes who not only live a vegan lifestyle, but prove that performance and muscle-building are not simply based around the idea of laboratory-manufactured and animal-based protein sources. This book will talk about the true dietary needs of vegans and where they get their sources from, and it will compare the types of nutrients and proteins other dietary lifestyles obtain in order to show that vegans do not simply go without, they just choose to broaden their food-based horizons.

Not only that, but many people believe that a vegan lifestyle cannot possibly give someone the energy they need in order to go workout in a gym for two hours. Well, not only will this be yet another myth debunked within the pages of this book, but it will also be something we address in full. That is, we will outline various workout plans and routines that will benefit the vegan lifestyle you have chosen (or are, at least, curious about) in order to achieve the physical benefits you want for your own body.

Vegans are not individuals who shove their beliefs down someone’s throat. They are individuals who are merely passionate about abstaining from the use of animal products. They do not consume them and, in some individuals, they even attempt to not use them. Are there extremists? Yes, but there are extremists in every healthy lifestyle.

Within the pages of this book will be dietary outlines for those who are (or want to be) vegan, exercise guidelines for those eating this type of food lifestyle, and athletes that will be highlighted in order to show real-life examples as to how this works. Not only that, but these athletes will have their own personal testimonies as to why they began this lifestyle and how it has benefitted them in the long run.

And, as if that was not enough, all of those dreaded myths perpetuated about the vegan lifestyle will finally be debunked.

Welcome to the new and amazing world of the vegan warriors.

Living a vegan lifestyle has many different benefits. Backed up by multiple prominent research studies, it has been proven that a vegan lifestyle can lower the risk of cardiac events, reduce the risk of developing certain cancers and lower an individual’s chance of type 2 diabetes. Not only that, but it helps with regulating one’s metabolism, weight and can stave off certain weight-induced phenomena, such as hypertension. A vegan lifestyle has also proven to reduce someone’s risk of stroke.
Why Go Vegan?

But, there are many different benefits to a vegan lifestyle that are not merely based on health. The UN recently released a report that stated a dire need for the world to migrate away from consistently consuming animal products. The impact from a majority of the world’s growing population consuming meat and animal products is the growing need for crops to feed those animals in order to breed them for food. Food is not like finding an alternative for fossil fuels. People are required to eat for their survival. However, as the current population stands, animals raised for the sole purpose of providing food to the general population consume over half of all the world’s crops.