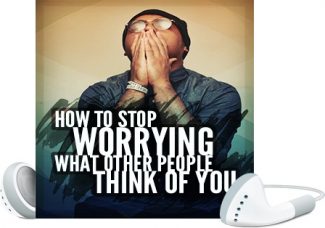 Everybody compares themselves to other people and have been doing this since they were a child. It is a natural thing for people to do because it provides a frame of reference for who they are and where they are in life.

The problem is that most comparisons are negative and based on insecurities and fear. This can lead to a person becoming very bitter about another individual and even angry. Negative comparisons like these often damage a person’s self worth because they believe that they are not good enough.

Some people use comparisons to boost their ego and to validate that they are great. This can often backfire and when it does the person is left feeling angry and bitter and their self esteem takes a big hit. People make validation comparisons for quick ego boosts but these are not foolproof by any means.

There are a lot of people that idolize others and end up being overly dependent on them. They dedicate their lives to making these people happy and can only be happy themselves if they feel they have done enough. In this situation the person being idolized has too much control of the other person.

It is a natural thing for human beings to compare themselves to others. We all do it and have done since an early age. But the issue really is about how those comparisons make you feel. If they empower you and spur you on to greater things then comparisons are very useful.

But if when you are comparing yourself with others you feel unworthy and depressed then this is where you need to change your approach. In this book you will learn exactly how to stop comparing yourself to others to prevent these feelings of worthlessness and also how you can actually benefit from a comparison.

Once you have mastered how to use comparisons in a good way you will find that you can automatically brush off any negative comparisons. It will not bother you that someone has something you don’t. You will be focused on improving yourself and your own life.

Take a good look at yourself

We have the capability to take a good look at ourselves and work out who we really are. This is one of those things that sets human beings apart from the rest of the animal kingdom. At any time we can go into deep thought about our life’s mission. We can become inspired to be the very best that we can be rather than just drift along in life.

So what is the best way to really evaluate yourself? The answer is that you need to compare yourself to others! That might sound counterintuitive but it is true. It is no use comparing yourself to your pet dog or cat. They are different species and will have few qualities that will want to aspire to.

The trick is to make the comparisons benefit you. Most people have standards in their heads that have not come from withinbut are externally influenced. Think about the girl who wants to lose a few pounds because she wants to look like the model on the cover of a magazine. Or the boy going to the gym because he wants those six pack abs he has seen in the movies.

The trouble with these kinds of comparisons is that they have not come from within you. Instead of developing your own standards for beauty you have let the external world dictate that to you.

Leon Festinger, a social psychologist, started to look into the reasons that we compare ourselves to others back in the 1950’s. After a lot of research and different studies he came to the conclusion that people compared themselves to others for 2 main reasons:

1. As a way to reduce uncertainty in their own life

Festinger called this “social comparison theory” and it was a significant breakthrough in human psychology. The real breakthrough was how he uncovered that people were incapable of defining themselves independently or intrinsically. They have to make comparisons with others to achieve this.

The bottom line is that to define yourself you need to compare yourself with other people. He also made the important discovery that if there is a big difference in ability or opinion between two people that there was much less chance that a comparison would occur.

So here is an important takeaway from Festinger’s work:

The more we think that a person is similar to us (for whatever important reasons) the more likely we are to want to compare with them.

Here is a common example. At work you are far more likely to compare yourself to someone who works on your team (an equal) than you are with the owner of the business or the CEO. If you play amateur soccer then you will compare yourself to other players in your league much more than you will to Lionel Messi.

It was also discovered by Festinger that when a person stops comparing themselves with another person where they experience pain from not being like them that they are highly likely to be hostile with this person.

When you stop comparing yourself to another person that makes you feel down then the way that most people deal with this is to “tear down” their feelings towards that individual. Often you willsubstitute another emotion such as anger to replace the negative experiences of the comparison.

Can you relate to this?

Have you ever stopped comparing yourself to another person because this was too painful for you and then turned against the individual?If you did this then you are certainly not alone as it is a very common practice.

The final conclusion from Festinger’s work was that if we feel that a person or group of people are very important then we will exert a lot of pressure on ourselves to try and conform to the opinions and abilities of this person or group.

So for example if you have joined a power spin class at your gym you could feel that it is far more important for you to put in the maximum effort there than you would if you were to meet some cyclists on the road. You see the spin club as an elite group that you need to aspire to whereas the cyclists on the road hold little importance for you.

In fact the spin class is so important to you that you pay your hard earned money to be part of it –and so does everyone else in the class!

Why you compare yourself to others

At this stage you may be thinking that all that we have discussed so far is obvious and you would be right. But why do you keep acting in this way and experiencing negative emotions when comparing yourself to someone else doesn’t work out well?