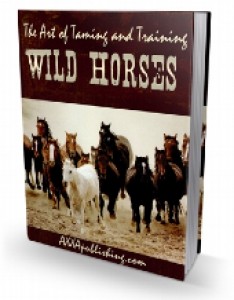 When you want him to start do not touch him on the side with your heel or do anything to frighten him and make him jump. But speak to him kindly, and if he does not start pull him a little to the left until he starts, and then let him walk off slowly with the reins loose. Walk him around in the stable a few times until he gets used to the bit, and you can turn him about in every direction and stop him as you please. It would be well to get on and off a good many times until he gets perfectly used to it before you take him out of the stable.

After you have trained him in this way, which should not take you more than one or two hours, you can ride him any where you choose without ever having him jump or make any effort to throw you.

When you first take him out of the stable be very gentle with him, as he will feel a little more at liberty to jump or run, and be a little easier frightened than he was while in the stable. But after handling him so much in the stable he will be pretty well broke, and you will be able to manage him without trouble or danger.

When you first mount him take a little the shortest hold on the left rein, so that if any thing frightens him you can prevent him jumping by pulling his head around to you. This operation of pulling a horse's head around against his side will prevent any horse from jumping ahead, rearing up, or running away. If he is stubborn and will not go you can make him move by pulling his head around to one side, when whipping would have no effect. And turning him around a few times will make him dizzy, and then by letting him have his head straight, and giving him a little touch with the whip, he will go along without any trouble.

Never use martingales on a colt when you first ride him; every movement of the hand should go right to the bit in the direction in which it is applied to the reins, without a martingale to change the direct of the force applied. You can guide the colt much better without them, and learn him the use of the bit in much less time. Besides, martingales would prevent you from pulling his head around if he should try to jump.

After your colt has been rode until he is gentle and well accustomed to the bit, you may find it an advantage if he carries his head too high, or his nose too far out, to put martingales on him.

You should be careful not to ride your colt so far at first as to heat, worry or tire him. Get off as soon as you see he is a little fatigued; gentle him and let him rest, this will make him kind to you and prevent him from getting stubborn or mad.