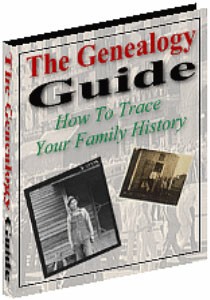 Once all family sources have been exhausted, now comes the real challenge of investigating from official-sources, and not just central records offices and county registers. There are many, many other repositories of information available to the researcher, all of which must be considered in relation to the actual family and whether you wish to restrict your investigations to a limited period of history, or instead, uncover anything you are to able about your family as far back as time, money, and ability allow.

The most logical and easiest next step is that of obtaining all official documents relating to recent generations as it is possible to obtain, a task usually accomplished from birth, marriage and death certificates held at your county courthouse. All information is of course committed to the basic tree format already waiting on paper or computer disk. Any other information to come to light and which might be clarified or expanded upon from other official sources should be noted for working on when the time is right, and includes such as relatives known to have a military record, those known to travel who will therefore have had their passport applications from 1795 onwards registered and so on.

Once you have a dear indication of your most recent generations, you will be able to track down copies of birth, marriage and death certificates from civil records which go back to the mid 1830s. Since mandatory registration it is relatively easy to trace a tree back to the second half of the nineteenth century. Then the really hard work begins.

Census returns are an excellent source of information relating to household members, and provide information gained every ten years since returns commenced in. For much information prior to civil registration, we must turn to county records, which can usually and quite easily take the investigator back to the mid 1700s, perhaps earlier where families have remained in one area. Records can be consulted at your county records offices, or sometimes from the International Genealogical' Index, or Percival Boyd Index, the latter of which covers the period 1538 to 1837.

Local newspapers might provide obituary details; gravestones also are havens for previously evasive information. Wills might uncover a skeleton or two for the unsuspecting detective. The process of accumulation continues. until eventually the trail dries up. It might take you to various little known sources of documentation, perhaps relating to small religious orders or now outdated trades and professions. It might even bring you to the genealogist's dream of finding his or her family recorded in the Doomsday Book, which commenced records in 1086.

If your search is local, your task might well be extremely easy in the initial stages, given that our ancestors were not frequently renowned for a travelled existence. Many in fact lived their entire lives in one county, and it is quite conceivable to derive a great deal of information from one day's sifting through county registers, nearly all of which, when completed, are stored in local county record offices. Of course if you are tracing the history of a well-travelled family, then your task becomes more complicated and of necessity far more costly to you.

Returning to the subject of County Record Offices, here one will find official census returns providing names, ages, marital status, occupation and county of birth of everyone living in one particular household. Such records are released to the public only after 100 years, but when opened are generally pounced upon by, genealogists for the wealth of information they contain.