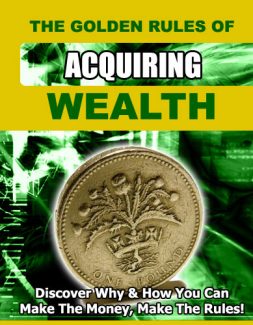 No man ought ever to indorse a note or become security, for any man, be it his father or brother, to a greater extent than he can afford to lose and care nothing about, without taking good security. Here is a man that is worth twenty thousand dollars; he is doing a thriving manufacturing or mercantile trade; you are retired and living on your money; he comes to you and says.

“You are aware that I am worth twenty thousand dollars, and don’t owe a dollar; if I had five thousand dollars in cash, I could purchase a particular lot of goods and double my money in a couple of months; will you indorse my note for that amount?”

You reflect that he is worth twenty thousand dollars, and you incur no risk by endorsing his note; you like to accommodate him, and you lend your name without taking the precaution of getting security. Shortly after, he shows you the note with your endorsement canceled, and tells you, probably truly, “that he made the profit that he expected by the operation,” you reflect that you have done a good action, and the thought makes you feel happy. By and by, the same thing occurs again and you do it again; you have already fixed the impression in your mind that it is perfectly safe to indorse his notes without security.

But the trouble is, this man is getting money too easily. He has only to take your note to the bank, get it discounted and take the cash. He gets money for the time being without effort; without inconvenience to himself. Now mark the result. He sees a chance for speculation outside of his business. A temporary investment of only $10,000 is required. It is sure to come back before a note at the bank would be due. He places a note for that amount before you. You sign it almost mechanically. Being firmly convinced that your friend is responsible and trustworthy; you indorse his notes as a “matter of course.”

Unfortunately the speculation does not come to a head quite so soon as was expected, and another $10,000 note must be discounted to take up the last one when due. Before this note matures the speculation has proved an utter failure and all the money is lost. Does the loser tell his friend, the endorser, that he has lost half of his fortune? Not at all. He don’t even mention that he has speculated at all. But he has got excited; the spirit of speculation has seized him; he sees others making large sums in this way (we seldom hear of the losers), and, like other speculators, he “looks for his money where he loses it.” He tries again. endorsing notes has become chronic with you, and at every loss he gets your signature for whatever amount he wants.

Finally you discover your friend has lost all of his property and all of yours. You are overwhelmed with astonishment and grief, and you say “it is a hard thing; my friend here has ruined me,” but, you should add, “I have also ruined him.” If you had said in the first place, “I will accommodate you, but I never indorse without taking ample security,” he could not have gone beyond the length of his tether, and he would never have been tempted away from his legitimate business. It is a very dangerous thing, therefore, at any time, to let people get possession of money too easily; it tempts them to hazardous speculations, if nothing more.

So with the young man starting in business; let him understand the value of money by earning it. When he does understand its value, then grease the wheels a little in helping him to start business, but remember, men who get money with too great facility cannot usually succeed. You must get the first dollars by hard knocks, and at some sacrifice, in order to appreciate the value of those dollars.