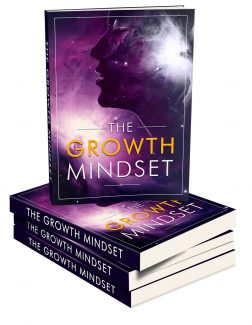 In this world, you’re either GROWING or you’re DYING… There's no middle ground. If you're standing still with zero progress, you're decaying. The same goes for success. It requires you to engage in the process of your personal growth at all times. And of all the things in life, what you believe about yourself can impact your success or failure.

People who believe that their abilities can be improved through their hard work and dedication typically move ahead and take action without coming up with excuses. These same people also demonstrate an open mind, are willing to learn and have been seen as most successful in different aspects of their life. So how do they do it?
This book will tell you how. You will see that the mind is the ultimate force to get you where you want to go but you need to harness its power correctly. How can you do that? Let’s find out together.

The mind is a very powerful tool and it ultimately determines who you are as a person. Also known as mindset, this thinking pattern or your frame of mind impacts how you make sense of the world as well as of yourself.

So in other words, a mindset is a set of beliefs and thoughts which influence the way you handle any given situation. It pretty much dictates your personality helping you sort out what’s going on around you and what you should do about it.

How Mindsets Are Formed

Since time immemorial, people have thought, acted and fared differently from one another. For the most part, common sense dictates that these differences arise from the variances in one’s background, learning experiences and training. Plus, research also points in the same direction.

Most experts today agree that forming a mindset is a combination of the two. For instance, while everyone comes with a unique set of genetics, their experiences, training and personal efforts take them the rest of the way.

So your life experiences and genetics together help frame your attitude and beliefs. And since both have an important part to play in your mindset, it helps to know what these two factors are all about.

First off, your attitude to something is how you think or feel about it, especially when it shows in the way you behave.

Then there are your beliefs which are merely feelings of certainty about something. Beliefs are based on ideas and when at a specific point, these ideas start to feel certain, they turn into beliefs. Beliefs, in turn shape your attitude which in turn shape your mindset.

Attitudes and beliefs then give rise to habits which are a direct reflection of your mindset.

Perhaps the most common and well known example of a mindset is seeing the glass as “half empty” or “half full”.

There are different types of mindsets that can either help you unleash your best or contain your potential. There could be a long list of these but here are a few which have been backed by research. Here’s a quick glance at the following:

The way you view abundance or scarcity in different aspects of life greatly influences your success in life, For instance, imagine that two people are walking down the street. They are talking to each other, laughing, joking and all the while breathing in and breathing out.

Now do you think that one of the two might worry that there may not be enough oxygen for the both of them? Likely not, since air is abundant.

Now place the same two people scuba diving where one’s tank starts to malfunction. That person signals the need for oxygen and suddenly the air around them becomes a precious commodity.

This scarcity could easily make the two worry with a concern that what if there isn’t enough oxygen for the both of them?

For the most part, the general population seems to be more inclined towards a scarcity mentality. They often view life as having only so much and if they had to share, there wouldn’t be enough for them.

This sad mentality makes it very hard for such people to share anything including credit, recognition, responsibility or even authority with others. Instead they only end up competing for available resources even when there may be an abundance of them.

On the other hand, those with an abundance mentality are not limited by this thinking pattern. Instead of seeing opportunity as limited, they strive to create more opportunity for themselves and embrace change instead of fearing it.

To sum up, a person with a scarcity mindset chooses negative thoughts and adopts a victim mentality. At best, their everyday focus is on all the things that may not be working.

But others with an abundance mindset tend to put all their energy reserves into what is working and see endless possibilities to improve their current situation.