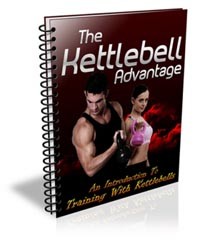 Pay attention to these and you will not only increase your chances of staying injury free but you will also get the most out of your early Kettlebell training!

Mistake 1: Going Way too Heavy. I touched on this in our chapter on choosing your first Kettlebell, but it's well worth repeating. There's no easier and quicker way to at best discourage yourself from further Kettlebell training or at worst to injure yourself badly than to attempt to train Kettlebell movements with a Kettlebell that is too heavy. Many rotator cuffs have been stained by ego-driven fitness enthusiasts who tried to do Kettlebell clean and presses with a 65lb bell who should have been using a 45lb bell. Friends, check your ego at the door when you take the Kettlebell Advantage.

Mistake 2: Using Isolation Movements. Kettlebell training is all about compound movements, not small joint isolation moves you may see people in a gym doing with light dumbbells. Please don't do things like wrist curls with your Kettlebells unless you want to end up with sore joints. Kettlebell training will build your strength, power and fitness over your entire body by working your entire body as a whole, not by making the mistake of trying to focus on very small body parts one by one. This is a key difference in the Kettlebell Advantage that puts the program heads and shoulders above the nonsense you see most people wasting their time with in big commercial gyms.

Mistake 3: Over Relying on Your Arms to Move Your Kettlebells. When training with Kettlebells most of your power comes from your shoulders, hips, quads and core acting as one. Trying to pull them off the ground using a rounded back and the strength of your arms is a common beginner's mistake that will not only limit the power you can generate but that can also lead to injury. Learn the habit of using your whole body to move your Kettlebells.

A look at some of the good YouTube videos on the subject (think Pavel, Mike Mahler and Steve Maxwell) can be a big help in this if you are training at home without a instructor.

Mistake 4: Not Building a Solid Kettlebell Foundation. There's plenty of Kettlebell exercises for you to learn as you become a more advanced lifter. In fact there's almost no limit to them. All in good time. As a beginner focus all your energy on building a solid and strong Kettlebell foundation. This may take a year or two. This is one of the beautiful things about the Kettlebell Advantage - it's simplicity and focus on back to basics aspect of what works, period. Embrace it! Avoid these beginner mistakes and you will find yourself on the fast track to Kettlebell and fitness success!

I've talked a bit in the past chapters of our guide here about the advantages of building a strong foundation in basic Kettlebell movements. These have been shown, again and again, to give us the most "bang" for our buck and to lead to huge strength and fitness gains in a very short amount of time. They provide the real meat of the Kettlebell Advantage.

Dig in to the Top Kettlebell Movements!

The Kettlebell Swing. Some swear that the "squat is king" but this may be the most powerful fitness movement of them all. The Kettlebell swing is so powerful and trans-formative there's been entire fitness books and programs wrote around this one simple move, and rightly so. A few months of swings and you may not be able to recognize yourself in the mirror!

The Kettlebell Swing is often used for high repetitions as a fat burner as well as for it's strength building properties.

The Kettlebell Press. There's a variety of Kettlebell presses and they will all do wonders for building your shoulders, upper chest, triceps and core.

The basic Kettlebell shoulder press involves starting with the Kettlebell on your shoulder and pressing it overhead. A slight bend in the knee and hip thrust is acceptable, turning this into what most trainers would call a "push press".

You can also begin with the Kettlebell hanging swinging it to the upper chest and pressing in a fluid motion. This builds massive power and makes the move a "Kettlebell clean and press". This move is loved by martial artists, boxers and other high impact sport's athletes.

The Kettlebell Front Squat. Swing Kettlebell(s) to upper chest, with help of a training partner. Instead of pressing overhead drop down in a controlled manner glutes as close to the floor as possible. Pause and explode to starting position.

This will tone and strengthen your quads, hamstrings, glutes and core.

The Kettlebell Deadlift. Position the Kettlebell on the floor in front of you. Bend knees, grip bell and tighten both your lower back and your core. Think of your hands as hooks. Extend your knees and pull with whole body ending with the Kettlebell at your waist. Repeat.

The Kettlebell deadlift builds nearly every muscle in your body. Don't neglect it. Equally useful for very heavy sets with low weights and lighter sets with very high reps.

The Kettlebell Russian Twist. Yes we even have a abdominal specific Kettlebell exercise. Sit in the sit up position on the floor. Lower your upper body until it is in the midway spot between your knees and floor. Hold a light Kettlebell on your chest. Twist your upper body from side to side with the Kettlebell nearly touching the floor at both ends.