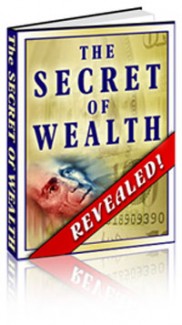 The Secret Of Wealth Revealed!

At Last, Discover How to Quickly Build Wealth and Achieve Your Financial Dreams!

This is Your Chance to Learn The Most Powerful Wealth Building Technique Ever Devised!

If you have ever dreamed of acquiring true wealth and receiving all the benefits that accompany it, such as:

Being able to decide what your work hours are. Want to knock off early one day? It’s your decision.

Being able to escape the competitiveness, the backstabbing and the long hours of the rat race

Being able to spend much more time with your family

… It’s Time to Stop Dreaming and Make It All a Reality!

Keep Reading to Find Out How!

According to respected author and financial expert Franklyn Hobbs, the secret of wealth is really no secret at all – and it isn't new.

As he points out, "for more than 2,000 years, it has been understood that the person who was poor and let it be known, and made little or no effort to rise above poverty, was largely responsible for his own unhappy condition."

That’s right, you don't have to win the lottery or inherit a fortune from a distant relative to become wealthy.

Scientific evidence suggests that you can do it all by yourself, without luck or inside connections or extensive business experience.

In fact, a recent study of several thousand people revealed something very interesting about personal success. According to the study, exceptional gifts, such as talents, unique abilities and intelligence, are equally distributed between people with high and with average incomes.

In other words, there is no such thing as an inherited propensity toward success or wealth. In fact, average and wealthy people seem to be remarkably similar!

So, if there really are no inherited differences between the rich and the poor what’s keeping average people like you and me from accumulating true wealth?

Believe it or not, it’s our behavior!

In his wildly popular “Secret of Wealth” ebook, Mr. Hobbs explains exactly how to take responsibility for your own financial well-being by changing your behavior.

"Wealth is a state of mind or perhaps it would be better to say that wealth is created through a state of mind. The acquiring of money and property, once begun, is a simple and easy process; growing rich comes through habits that are such fixed parts of one's daily life that, once on the road to wealth, it would be quite difficult, if not wholly impossible, to stop the growth."