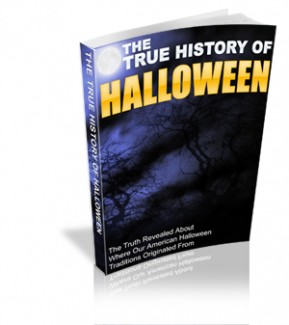 When colonial Americans first began participating in Halloween celebrations they would conduct something known as "play parties". These parties were held as public events in celebration of harvesting crops. During the play parties, neighbors would get together and tell tales very similar to ghost stories we tell today. They would also experiment in fortune telling, plus throw in some dancing and singing. Sometimes, there would also be some type of pranks being played. Or "tricks" if you prefer.

Not everyone across America would participate in these play party gatherings however. Even though annual autumn festivals were commonplace, these were not classified as Halloween parties until a bit later.

Around the mid nineteenth century, after the Irish immigrants had arrived in America somewhere along 1846, Halloween became more popular throughout the country. Combining Irish and English traditions of old, people began the more modern day custom of dressing up in costumes and going trick-or-treating. During the early days, treats consisted of food items or money, unlike the candy that is traditionally passed out to trickor- treaters of today.

By the end of the nineteenth century, Halloween was mainly celebrated with home hosted parties. These would be thrown for both children and adults. During these upgraded get togethers, party goers would play festive games, eat seasonal foods, and wear stylish costumes that were popular to the period. Most hosts would steer clear of things considered too frightening such as ghost stories so everyone could have a fantastic night of fun.

When the 1920's and 30's rolled around, Halloween festivities received yet another update. Many of the celebrations were centered around community activities such as parades and city-wide parties.

In the 1950's Halloween was becoming a celebration geared towards the youth of America thanks to the baby boom. During these years, community based parties were drummed down into classroom festivities and home based parties. And it is also during this time that trick-or-treating came back in to fashion.

Bringing back the tradition of trick-or-treating provided communities with a way to enjoy and share the holiday together without the need for huge "town hall" type gatherings. This was considered a great American tradition of being able to celebrate the holiday as a community while keeping costs and vandalism down.