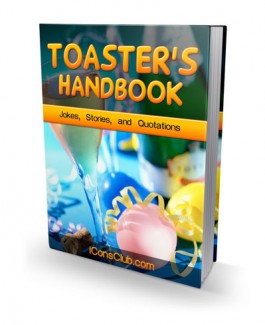 Before making any specific suggestions to the prospective toaster or toastmaster, let us advise that he consider well the nature and spirit of the occasion which calls for speeches. The toast, after-dinner talk, or address is always given under conditions that require abounding good humor, and the desire to make everybody pleased and comfortable as well as to furnish entertainment should be uppermost.

Perhaps a consideration of the ancient custom that gave rise to the modern toast will help us to understand the spirit in which a toast should be given. It originated with the pagan custom of drinking to gods and the dead, which in Christian nations was modified, with the accompanying idea of a wish for health and happiness added. In England during the sixteenth century it was customary to put a "toast" in the drink, which was usually served hot. This toast was the ordinary piece of bread scorched on both sides. Shakespeare in "The Merry Wives of Windsor" has Falstaff say, "Fetch me a quart of sack and put a toast in't." Later the term came to be applied to the lady in whose honor the company drank, her name serving to flavor the bumper as the toast flavored the drink. It was in this way that the act of drinking or of proposing a health, or the mere act of expressing good wishes or fellowship at table came to be known as toasting.

Since an occasion, then, at which toasts are in order is one intended to promote good feeling, it should afford no opportunity for the exploitation of any personal or selfish interest or for anything controversial, or antagonistic to any of the company present. The effort of the toastmaster should be to promote the best of feeling among all and especially between speakers. And speakers should cooperate with the toastmaster and with each other to that end. The introductions of the toastmaster may, of course, contain some good-natured bantering, together with compliment, but always without sting. Those taking part may "get back" at the toastmaster, but always in a manner to leave no hard feeling anywhere. The toastmaster should strive to make his speakers feel at ease, to give them good standing with their hearers without overpraising them and making it hard to live up to what is expected of them. In short, let everybody boost good naturedly for everybody else.

The toastmaster, and for that matter everyone taking part, should be carefully prepared. It may be safely said that those who are successful after-dinner speakers have learned the need of careful forethought. A practised speaker may appear to speak extemporaneously by putting together on one occasion thoughts and expressions previously prepared for other occasions, but the neophyte may well consider it necessary to think out carefully the matter of what to say and how to say it. Cicero said of Antonius, "All his speeches were, _in appearance_, the unpremeditated effusion of an honest heart; and yet, in reality, they were _preconceived with so much skill_ that the judges were not so well prepared as they should have been to withstand the force of them!"

After considering the nature of the occasion and getting himself in harmony with it, the speaker should next consider the relation of his particular subject to the occasion and to the subjects of the other speakers. He should be careful to hold closely to the subject allotted to him so that he will not encroach upon the ground of other speakers. He should be careful, too, not to appropriate to himself any of their time. And he should consider, without vanity and without humility, his own relative importance and govern himself accordingly. We have all had the painful experience of waiting in impatience for the speech of the evening to begin while some humble citizen made "a few introductory remarks."