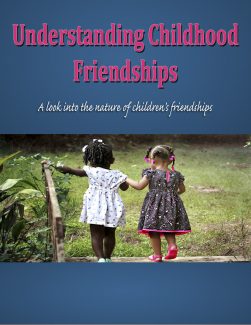 As the great poet, John Donne wrote in the 17th century, "No man is an island entire of itself; every man is a piece of the continent, a part of the main…"

No one can be alone in life. We need others to support us mentally, physically, emotionally and spiritually. Relationships, and in particular friendships, can sustain us throughout our lives. Even when romantic relationships end, we get laid off, or become ill, true friendships endure. When times get tough, we know we always have someone to turn to who can help us in a practical way or a supportive way, as we cry on their shoulder and then move on to deal with the issue that has arisen.

But good friendships are not a matter of accident or chance. They come from skills cultivated when we are younger, which can help us form life-time friendships even in our earliest years. Like every other aspect of growing up, children need to learn friendship skills. They learn them from parents and from their peers.

In this guide, we will be looking at the nature of children’s friendships, how they form, and how we as parents can help ensure they are able to form lasting friendships and avoid negative relationships such as bullying.

So, let’s get started with a look at the importance of friends.

THE IMPORTANCE OF FRIENDS

From the moment they are able to listen and understand, young children start to learn about interpersonal dynamics within the family, and with children their own age - their peers. It is an important aspect of growing up because it helps them understand interdependence and yet enables them to become independent.

If they have one or more siblings in the household, this can help teach them about relationships with people their own age as compared with adults. Children get a lot of educational benefit from their parents, but the interactivity with other children at home and in social settings such as play school, play days and more, helps them gain a range of skills that will put them in good stead in their adult life.

For example, children learn communication skills - being able to say what they want and how they feel. They ask questions, invite other people to play, and organize the activity into some sort of sequences of events.

In the process of dealing with other children, they learn about emotions - their own and those of others. They feel valued because they have friends, and learn how to try to preserve the friendship. They learn to control their temper tantrums and deal with frustrations in a positive way, so as not to argue with others or take their emotions out on them and drive them away. Through this valuing of the friendship, they learn more complicated skills - such as avoiding aggressive behaviors like hitting or biting, and being able to compromise or come up with other ideas that might work.

Through friendships, they also learn that not everyone is the same and that people have different thoughts and feelings they need to be aware of and sensitive to. They gradually learn how to see things from others’ points of view and adapt their communication and play style to different people.

They also learn new skills from their friends - things they might not have been able to do until they saw them and decided to imitate them. This can be a bad thing sometimes, of course, if kids "egg each other on" or teach each other inappropriate vocabulary; but again, this is where strong parental guidance can help.

Modeling in Your Own Household

Children take their cue from their parents, so if you don’t treat others with respect, cheat at games and swear like a trooper, they are going to think this behavior is normal and acceptable and do the same. However, this can get them into considerable trouble at school and in social situations.

In some cases, they might even bring home a friend who acts like that. It is important not to overreact, but rather, to teach by example. Saying please, thank you, being kind, offering compliments and supportive praise all "grease the wheels" of human interaction. So too does learning when to speak up about an issue, and when to keep silent for the sake of harmony and the preservation of the relationship.

The Importance of Friendships Starts Early

How to make friends, and keep them, are two of the main developmental tasks children need to learn from their preschool years and upwards. Studies have shown that these skills help prevent children from having psychological and school problems later in life. Yet studies have also shown that some children as young as three are already having serious problems negotiating relationships with other children.

About 5 to 10 percent of young children will go on to experience persistent problems, such as social exclusion and rejection, or physical or verbal harassment from their peers - either due to their own actions, or the bullying of others. Peer relationship difficulties in a child’s early years are unfortunately a powerful predictor of future emotional and behavioral problems. These can include:

Emotional problems such as loneliness, anxiety and depression

Behavioral problems, such as physical or verbal aggression, hyperactivity or defiantbehavior

Physical issues, such as being bullied, or bullying others

Children with developmental difficulties are at particular risk because they develop more slowly than their peers and often are not allowed to or don’t get as many chances to interact with children their own age. As children get older, they might also become more judgmental and start to make fun of the person they once enjoyed having as a friend.

Being made fun of or bullied can lead the child to become socially withdrawn. Adults can help with conflict resolution, positive reinforcement of good friendship skills, and discipline in relation to aggressive or bullying behavior.

Day care centers and schools might also use programs that try to improve the children’s social behavior skills and their peer relationships. They will use varied activities and try to involve everyone in the efforts, staff and parents alike. If you are concerned your child is very shy and/or having difficulties with peer relationships, you might ask about training, or look up information online.