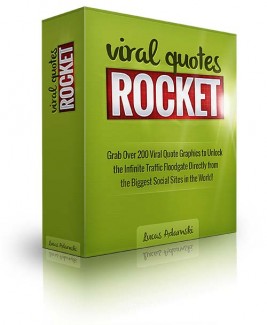 You may have seen these inspirational quote images on Facebook or Pinterest. They are getting hundreds and thousands of likes and views (even overnight!).

It's a no surprise, because almost everyone love them!

John Kremer shared in his blog post (Pinterest Pin Continues To Go Viral) how he was able to get 1,416,972 pins and 122,547 visitors to his website in a year and a half from a simple quote image. Here's his original case study:

"In a year and a half, this image has now been pinned by 1,416,972 people (according to the most recent stats from Pinterest). It still drives between 50 and 200 people to InfographicADay.com every day. Over the year and a half, it has driven 122,547 visitors to the website. That averages out to almost 7,000 visitors every month."

The original redesign that I posted in November 2012 has had 107,788 repins in 19 months and, on average, drives 1,000 new visitors to InfographicADay.com every month."

It's again no surprise John got so much free traffic, because...