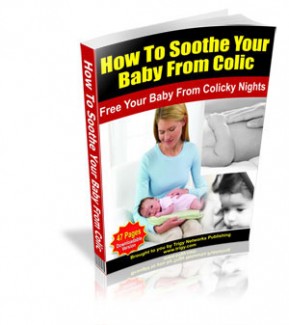 Typically, baby colic is a condition that affects a small baby, only a few months old usually – but it disappears almost within a couple of weeks for lucky babies (and parents, who lose out on sleep!) However, there are instances of colicky babies remaining that way till 8 months of age; this is the case mostly with bottle-fed kids but may happen to breast-fed babies, too.

Evening time is most likely to bring on a colicky spell in babies that have a tendency towards the condition.

There are many theories about why babies cry this way and different medical experts have their own take on the reasons underlying baby colic: but they are mostly in agreement over parents needing to take it easy with baby colic only being a short term complaint, not a disorder as such, which many misconstrue it as being.

The most definite way to establish the existence of colic complaint in a baby is to rule out all other reasons for crying such as hunger, sleep or tiredness; for example, if the infant cries more than thrice a week for the same amount of hours every time and for 3 weeks a month, it is most certainly colic.

The most accepted theory of what causes colic in newborn infants is based on the immature digestive system babies have that is still to get adapted to receiving and processing a different food intake – it is most probably their under-developed gastrointestinal system with muscles still learning proper rhythm for processing food effectively through the digestive tract that causes frequent stomach upsets and makes them cry due to the discomfort.

Another medical theory relates infant colic to the lactating mother who may be consuming foods that contain unsafe chemicals that trigger off allergies and digestive tract problems in the baby, resulting in colicky episodes. These food elements that may be responsible for causing bloating, gas etc are typically varieties of cruciferous vegetables and other gas-producing products that are passed on to the infant through breast-milk; besides, babies often swallow air when they are being nursed or even when they cry, which further adds to the problem.