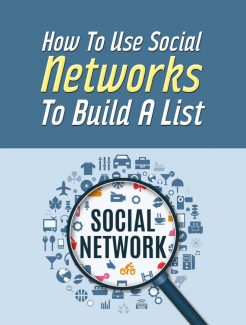 Social networks have made building and widening your social contacts extremely easy. In the past, you might have had to attend numerous functions and paying for gas, food, and clothing just to show up and hand out a few business cards that later got tossed. With online social networking, the costs of networking are zero, but the rewards are immeasurable. Creating a list of social contacts online can lead to opportunities worldwide, something that local networking could never do for you.

LET PEOPLE COME TO YOU

Instead of trying to push people into getting acquainted with you or your company, wouldn't it be great if you could get up each morning and find seven to ten new people wanting to befriend or follow you? This is completely doable with social networking sites like Facebook, Twitter, and LinkedIn. Once you establish a profile and a following, just your everyday activities online can draw people to you without you having to go out and find them. Even if you do choose to find people first, it's still far easier to connect with them online and far less intrusive than trying to schedule a meeting, a phone date, or any other old-fashioned method of networking.

WHICH SOCIAL NETWORK SHOULD YOU JOIN?

You've heard of MySpace, Twitter, Facebook, and LinkedIn, but which is the best to join? The answer to that is that you can and should join at least three of these networks, depending on your demographic. The more you join, the better and the wider your exposure; however, not every social network will match up to your business profile. MySpace, for instance, tends to be visited by a younger crowd than Facebook and Twitter. If you're marketing to teenagers, then it's a great place to network, but if you're more into college-age professionals, then Facebook will be a better match for you. LinkedIn is for any working professional, although some people use it to locate jobs when they're in the market for that too because of the number of working professionals on it.

Twitter is in a class all by itself. It can appeal to many different groups of people, and it is also the easiest platform to generate a large following on. It may take a little while to get used to it, but getting on Twitter can help you create a large social network in as little as one month if you do it right. Imagine having close to 1000 followers in little more than a month? If only 1/10th of those people look at your services or offerings when you post, you will have 100 new eyeballs to market to. Let's be clear, however, that marketing or building a list on social networking has to follow some guidelines that we will discuss in the next section.

The Rules Of The Game

Social networks have special rules that you must follow to keep your account active. Administrators frown on spamming people with unsolicited emails and other types of commercial activities. If your goal is to build a list for commercial purposes, it's still doable; it just has to be done more casually than you would on your own website. Selfpromotion is allowed, but any time you take an email off of someone's social networking site and add it to your email autoresponder campaigns, you are spamming them, unless they offer you permission to market to them first. Harvesting emails from these sites is thus very difficult, and this is done deliberately.

BUILD YOUR LISTS WITHIN THE NETWORK FIRST

That doesn't mean that you don't want people to befriend or follow you on these sites. It means that you have to take care as to how you end up harvesting their email addresses. Just because someone befriends or follows you doesn't mean that they are open to your marketing campaign and want to receive commercial solicitations. In fact, if you do send them that information, they're likely to report you as a spammer, and you can have your account revoked. Thus, the best thing to do is to start by building your lists within the network without harvesting the emails provided there directly. You can still post status updates that promote your business or offerings, but direct emails of this variety will have to wait until later.

MOVE THEM OFF TO AN INTERMEDIARY SITE

You should have an intermediary site ready to capture their email address later. It can be a blog that allows them to subscribe. It can be a website that isn't that commercial. It can even be some article marketing site where they can land, read some more of your content, and then follow the resource box links back to your website. As long as the final destination offers them a chance to subscribe to your email marketing lists via some free offer, then you will have permission to market to them off of the social networking sites, where you can be a little more straightforward.

HOW TO MARKET TO SOCIAL NETWORKING CONNECTIONS

Before then, you will want to create a highly targeted list of friends and followers who have the potential to follow you back from the social networking sites to your other websites. You can do this by carefully crafting profiles that appeal to your demographics and updating your status updates with information that draws attention from that demographic. As you continue to do these two activities, more and more people will find you, and you will have a wider exposure.

You don't just want to build a large list of people who have nothing to do with your market niche; you want to have a list of people whose interests mean that they might want to buy your products and services later on. Social networks are excellent mediums for creating targeted lists because it's easy to see what people's interests are via their searchable profiles, and they can see yours too!

USING YOUR PROFILE TO ATTRACT THE RIGHT DEMOGRAPHIC

The first step to getting a targeted list together is to clearly project the right image and interests in your own profile. To do that, you want to fill out the profile as completely as possible. You also want to use your real name, as this profile should be as authentic as possible. For Facebook, for instance, you would want to add as many details of books or movies relevant to your market niche to attract the right demographic. In Twitter, you would want to give as many keywords that are relevant to the niche you are marketing as possible in the 140-character description of your profile. In LinkedIn, you would also want to give a good, accurate description of your interests and accomplishments as they relate to the market niche that you are marketing to.

FINDING OTHERS WHO HAVE SIMILAR INTERESTS

Once you've got your own profile filled out, you can start searching via the keywords you've used to find others who are in your market niche and invite them to follow or befriend you back. In Facebook, they track everyone with similar interests, so all you have to do is to click on the link in any of the categories in your Info tab, and you'll get a listing of people who have similar interests.

Facebook and LinkedIn also have groups that you can join that can lead you to people with similar interests. You can even create your own group if that's something you want to do. By networking with people who are in the same group as you are, you will be able to build your list fairly quickly. People like to network with people of similar interests, and this works well when you are trying to market to a specific niche.

The Bigger, The Better

You will want to build as big a list as possible within each network. The reason for this is that the bigger your list, the more possibilities to market to later on. Also, a big list has a magnetic effect on other people who will join just to find out what all of the fuss is about. It is easier to build a big list on Twitter than on any other social networking site, but it's possible to do it on all of the social networking sites. Here, we'll discuss a few ways to get a jumpstart on building a big list quickly and easily.

You jumpstart every social network list by befriending or following people you know, whether they're in your niche or not. This way, you aren't the person with only a few people on your list. That's never attractive. Start with people who you already know who are online. They can be work colleagues, neighbors, friends, and family. As long as you can get them to befriend or follow you back, you have the basis of a good start. Once you have a few of those, you will start to target people better so that your list can be used for marketing purposes later.