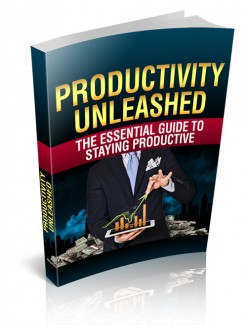 Ok, so by now you should be getting a pretty clear message that setting up a good workspace and being as organised as possible can have a massive impact on your productivity.

Now it's time to get into practical ways of increasing your productivity on a day to day basis. If you implement what we're going to talk about below then you'll go a long way towards getting more done in less time and being more productive on a consistent basis.

To-do lists are probably one of the first things you think about when you approach the subject of productivity. They're something that millions of people use each and every day so that they know exactly what they need to get done, however aside from just writing down a list on a piece of paper there are a few things you can do to improve the effectiveness of them.

Make your list at the end of each day

The first thing to say is that you should consider making your to-do lists at the end of each day, rather than at the beginning. Most people will load up their computer in the morning, check their emails, check social media and then think about what they actually need to get done during the day ahead and write their list. This is often a bad idea because generally you will have wasted several hours in the morning before you've even made your to-do list and started on the first task. On the other hand if you make your to-do list at the end of each working day then you'll fire up your computer the following morning and be able to get stuck straight into the first task.

Another thing you can do is to put a number by each item on your to-do list according to its priority. So if you have five main items on your to-do list then you would number each one from 1 to 5, with 1 being the highest priority task and 5 being the lowest priority task. Again, this isn't really rocket science but you would be amazed by how many people fail to do it.

Having a to-list that includes 30 items is just setting yourself up for failure. It's overwhelming - and it's probably unlikely that you'll be able to complete all of the tasks within a single day.

If you're struggling to reduce the size of your to-do lists then consider dropping your common tasks from the list altogether - for example "check email" is probably something that you will do anyway and might not need to be on your list at all.

It's important that each task on your daily to-do list is actually achievable in the day ahead - and you can do this by breaking down your bigger tasks into chunks or mini-tasks. If you were writing a book, for example, then it would be silly to have a to-do list task called "write my book." A much better idea would be to have it as "write 10 pages of my book" or "finish chapter 4."

Do your most dreaded task first

This one is a biggie and can really set you up to be productive for the entire day. Most of us will find that there is a particular task on a given day that we're really not looking forward to, therefore by getting it out of the way first it will free your mind to do your other tasks later on, safe in the knowledge that the dreaded one is already done.

Again, this is a very simple tip but extremely powerful. We all have tasks that we dread and put off for as long as we can - but can you rest when it's NOT yet done? Nope, you keep thinking about it and it’s generally on your mind. Nine times out of ten you then find that when you do finally get around to doing it it's not as bad as you even expected.

When do you work best?

When organising how you're going to spend your day it's important to think about when you work best. Some people are crazy productive first thing in the morning, whilst others prefer to work later on and maybe even in the evening. Generally speaking most people are productive at the beginning of their working time and then begin to flag as the day goes on.

Set your working hours - and then stick to them

One of the things people seem to struggle with when it comes to working from home is separating their home life from their working life. Thanks to smartphones and tablets it's very easy to start doing things like checking your emails in the evening whilst sitting in front of the TV - and before you know where you are you're never away from work.

At the same time it's easy for leisure activities such as browsing social media and watching YouTube videos to start creeping into the time when you should be working. Yep, it's those horrible distractions again.

Ideally you should set yourself a set working time - for example 9am to 5pm Monday to Thursday, with a lunch break between 1pm and 2pm. Let people around you know that this is your working time and that during these hours they should treat you as though you were actually at work in a corporate office - which means not disturbing you with family or social stuff.

Inside of your working hours you should try to be totally focused on work, however equally you should try not to do anything work related outside of the times you set. As touched on earlier, closing your office door is an added way of providing a separation between your working life and your leisure time.

Give yourself regular breaks

However you organize your working days it's important to give yourself regular breaks from tasks. Trying to focus for hours on end without a break is neither practical nor any good for your productivity levels!