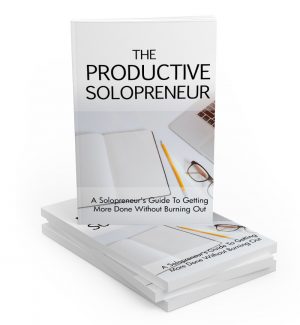 Chapter 1: Why Solopreneurs Struggle With Burnout Being a solopreneur means being an entrepreneur that runs everything themselves. There are countless advantages to this kind of business model, and thanks to the web, it's now more feasible for more people than ever before.

The notion of running an entire empire single-handedly would have seemed like an impossible pipe-dream only a few years ago. Today though, this is what more and more people are living as their reality. The internet is such a powerful force multiplier that it allows many people to truly become "digital polymaths."

Take video game development as a perfect example. Once upon a time, during the days of the ZX Spectrum and other early hardware, it was possible for a single developer to create a game in their basement and release it to the world to mass acclaim. But then computers developed further, and computer game graphics became photo-real. Today, the budget for a "AAA" title is gigantic, and the projects require thousands of people working around the clock for years.

For many years, it was impossible for a single developer to compete with the major game studios. But then things changed.

Tools like Unreal Engine and Unity provided ready-made physics and graphics rendering pipelines, even providing drag-and-drop interfaces for developers to streamline production. Then came freely available assets such as 3D models, music, textures and more: created by the community and distributed with a creative commons license. Often these were free. Suddenly, a single developer could leverage powerful tools and the hard work and creativity of the community to develop a game that would look almost as graphically impressive as something built by a much larger studio.

And slowly, the industry saw the rise of the "indie developer." Solo projects like Hyper Light Drifter, Undertale, Minecraft, Thomas Was Alone, Stardew Valley, Spelunky, Braid, Cave Story and others have gone on to sell millions of copies!

Then there are the distribution platforms that allow individual creators to upload their projects to be easily discovered. There are video and photo editing tools that make it easier than ever before to create marketing materials. And there are forums, social media platforms, and SEO, that help creators to reach a massive audience.

A single person can be an entire games business. And by taking this route, they can potentially reap HUGE rewards. Not only do they get to bring to life their creative vision, but they also get to take home all of the profit for themselves.

Building a game is not an easy project, though. It still requires a huge amount of hard work, coding skill, passion, and creativity. The most successful indie games also manage to sidestep the issue of

"photorealism" with striking graphical styles that help them to stand out, while also reducing the amount of work necessary for the creator.

But this is just one example of how tools can empower individuals to take on much larger organizations. There are countless other examples of this: from owners of successful blogs to creators of highly popular YouTube channels. You can be an affiliate marketer. You can make money reselling hats or any other physical product.

The latter is a business model that has been particularly transformed by the power of the web: thanks to sites like Alibaba it's now possible to work directly with manufacturers that will produce your products and then deliver them directly to your customers. The best part is that they don't even reveal themselves, meaning that, as far as the customer is concerned, you have your own factory!

Any of these business models are available to the proactive individual who is willing to learn and who knows how to spot an opportunity. With a little creativity, you can even create your own business model that simply didn't exist before!

Challenges of the Solopreneur

But while the solopreneur lifestyle is liberating in many ways, it can also be extremely challenging. That's because it requires you to wear a lot of hats and to take full responsibility for every aspect of your business.

Even if you are simply running a blog and selling affiliate products, this can be a surprisingly challenging lifestyle. Suddenly, there is no employer. There is nobody who is going to take responsibility for your business. There is no one to blame if things go wrong.

Likewise, there is no guaranteed paycheck. There isn't even guarantee that you'll have work this time tomorrow.

Things can be going extremely well one day, and terribly the next. What if Google removes your site from its listings and you can't sell any more products?

What if your one big client moves on and you have a quiet spell lasting for months?

What if a shipment of products goes missing?

As the solopreneur, you must be ready to weather all these scenarios. Not only that, but you must also make countless huge decisions.

You run a YouTube channel, and you want to sell an eBook from there. But how much do you charge for it? What eCommerce store do you use to sell it from?

What if your loyal audience finds it offensive that you are now charging for information, and thus they leave you?

What if the WooCommerce store crashes because you have an outdated PHP version on your server? And what if that means you lose thousands of preorders?

And do you let that other creator you met upload videos to your channel? What if those put off your viewers because it's not what they came to see? What if they like the other person's content more than yours??

Juggling work is also extremely difficult – especially if you want to maintain some semblance of a work/life balance. This is especially true for a service provider. In this scenario, there is no delineation between work hours and downtime.

That is to say, that you could work 9-5, but you could also work 9-9. That latter option would mean you earn a LOT more money! Do you really need to be relaxing in the evening when you could be getting closer to your goals?

What if you don't finish your work on time? Do you work a little more? What if there's something you want to buy?

Again, the number of variables is huge, and you are constantly forced to make these decisions. Even when you are "relaxing," you will still be questioning whether you could be doing something more useful. You might still be worrying that that work wasn't done to standard.

Then there are the emails from customers who couldn't download/didn't like their products. And from clients who don't like your work. There are the comments on your YouTube videos from people who don't understand what you're trying to do and seem to have a vendetta against you. It's stressful!

You are, after all, a pioneer. And with a new type of career, we need a new approach to health and productivity.

But here's the thing: it's not just about trying to "survive" in business. The truth is that the more we improve our focus, energy, creativity, and health, the more we will produce. As a solopreneur, everything you sell and everything that earns you money comes from you.

And this can result in a HUGE increase in your productivity and profits. Because when you're a solopreneur, learning how to double your output, means doubling your profit!

Let's jump straight into the deep end with a concept that has been gaining a huge amount of attention online, and that has the potential to transform your productivity and wellbeing: nootropics.

Nootropics are "smart drugs." That is to say that they are medications, supplements, and drugs that in some way, boost cognitive performance. Many of us start our day with just such a "smart drug." That's caffeine! But while caffeine certainly has its benefits, it's not going to turn you into Albert Einstein or Steve Jobs.

Is there a pill out there that can? Is there such a thing as a real-world NZT? (The smart drug depicted in the film Limitless). According to some people, the answer is yes. And interestingly, nootropics are reportedly in wide use throughout Silicon Valley.

One of the most outspoken advocates for the use of nootropics (which is pronounced "noo-oh-tropics") is the self-proclaimed biohacker "Dave Asprey." Dave Asprey gave the world Bulletproof coffee and has achieved no small amount of success. He credits Modafinil with much of this success.

So, just what is modafinil? Modafinil is a wakefulness agent that is prescribed for narcolepsy. It is also given to shift workers and those who travel abroad for their work and experience a lot of jetlag.

The precise "mechanisms of action" (how it works) are not fully understood, but it is believed to work on orexin – a chemical that helps control the sleep-wake cycle – and to increase levels of dopamine in the brain.

Not only does modafinil allow someone to work harder and for longer without burning out (ideal if you're a solopreneur who likes going out, or if you have a young family), but it also appears to heighten focus and motivation while you're working! This is the closest thing many people have found to a Limitless pill.

But is it safe and smart to use? That's a much more complex and nuanced question. Modafinil has no known side effects (other than potentially causing mild headaches and suppressing appetite). It is not addictive and has a low potential for abuse. However, it is also a controlled substance in many regions, meaning you have no choice but to buy from illicit sources. Not only that, but the long-term studies have yet to be carried out.

Moreover, the brain is actually an extremely complex piece of machinery. Raising dopamine increases focus and memory, but did you know that it also leads to a spike in cortisol? This can cause anxiety and actually blunt your creativity. That means that although modafinil might be useful for filling out spreadsheets, it could hurt your ability to plan for the long-term future of your business.